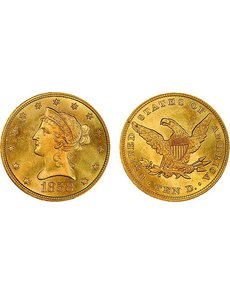 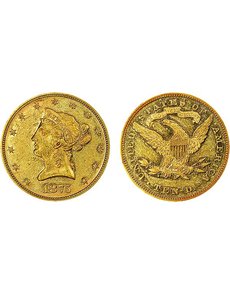 Fewer than 10 1875 Coronet gold $10 eagles are known today. This one, graded PCGS AU-50, is from the David Hall Collection of Coronet eagles that was acquired by Legend Numismatics.

The transaction is valued at $4 million, according to Laura Sperber, Legend president.

? 1875, PCGS About Uncirculated 50. With only 100 coins minted, this is the lowest mintage regular-issue United States coin, and many experts believe fewer than 10 examples are known today.

? 1902, PCGS MS-66, like many of the coins in the Hall Collection, it is the finest known and the only one graded at this level.

After carefully assembling the collection during the past seven years, Hall admitted he had mixed emotions about selling it, according to a press release from Legend.

“While I have a personal use for the money, I really had second thoughts about actually selling my set. I put a lot of work into building it, and it was a lot of fun for a long time,” explained Hall.

“I’m glad Laura bought my set for Mr. Simpson, and I’m happy my ‘babies’ have found a great new home. It’s interesting that Mr. Simpson also has the finest collection of $10 Indian Head gold coins on the PCGS Set Registry, so his collection of 1838 to 1933 gold pieces now is really something special.”

“I immediately called David when I heard he might be willing to sell his incredible collection. This set has a unique appeal because many of the coins are not Mint State but they are extreme rarities nonetheless. It was not until we sat down to actually figure the deal coin-by-coin that we realized exactly how rare and undervalued most of the coins in the $10 Liberty series really are. We then understood why David chose this series to concentrate on.”

Simpson, through Legend Numismatics, has been steadily assembling a major collection of U.S. coins and patterns.

In an exclusive interview published in the Jan. 3, 2011, issue of Coin World, Simpson explained how he began collecting coins as a teenager.

Among his acquisitions is a complete set of 1943 Lincoln bronze cents from all three U.S. Mint facilities, including the unique 1943-D example from the Denver Mint. In September he purchased the unique 1943-D bronze cent for a record $1.7 million, enabling him to complete the 1943 set he had begun to assemble six years earlier.

The premier collection of U.S. pattern coinage today, including gold denomination patterns struck in gold, reportedly is the Simpson Collection. The collection pedigrees most of its gold patterns to the gold pattern collection of Dr. John E. Wilkison, a Springfield, Tenn., collector who began his numismatic interests in 1934.

In late 2007, Simpson acquired more than 1,000 patterns in a single transaction totaling more than $30 million that was brokered by Legend Numismatics. The inventory list for the patterns acquisition totals more than 70 pages.

To acquire such rarities requires vast wealth, of course. Simpson founded XTO Energy Inc., Fort Worth, a leading producer of natural gas in the United States. Simpson’s firm merged with ExxonMobil in 2010.

Throughout the last decade Forbes magazine has consistently ranked XTO Energy in the upper tier of its Best Big Companies and in 2009 listed Simpson as No. 5 on its list of the 25 highest paid male CEOs.

Simpson became a minority owner in the Texas Rangers baseball team in 2010, which would win its first American League pennant in team history and also play in the 2010 World Series.

For additional information about Legend Numismatics, telephone the firm at (800) 743-2646 or visit online at www.LegendCoin.com. ¦