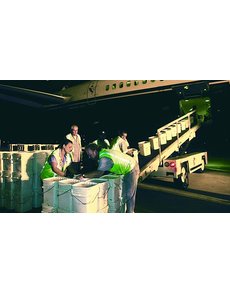 In a 2007 image, Odyssey Marine representatives Greg Stemm, left, and Tom Dettweiler examine coins recovered from a shipwreck the firm will only identify by the code name “Black Swan.” Company officials say they have recovered more than 500,000 silver coins, weighing more than 17 tons, along with hundreds of gold coins. Ownership of the coins is under dispute.

Several cables were released that described how U.S. ambassadors offered confidential customs documents prepared by Odyssey Marine Exploration, a Florida-based treasure salvors firm, to Spain, in return for assistance in helping return an Impressionist painting to a U.S. citizen.

WikiLeaks is an international nonprofit organization that publishes private and classified media from anonymous news sources. The Web site was unveiled in 2006 and it has characterized itself as an “uncensorable Wikipedia for untraceable mass document leaking and analysis.”

In March 2007, Odyssey Marine, Tampa, Fla., discovered a major shipwreck on the floor of the Atlantic Ocean, in international waters, that contained nearly 600,000 silver coins. Odyssey named the find the “Black Swan.”

Odyssey Marine has argued that even if the “Black Swan” is the same ship as the Mercedes, the ship was serving a commercial, nonmilitary purpose when it sank and the majority of coins do not belong to Spain as the ship was carrying commercial goods from Peru.

In 2009, a U.S. district judge ruled that Odyssey Marine should return the treasure to Spain and Odyssey has appealed the decision.

As Spain sought to recover the “Black Swan” treasure, the leaked cables indicate that U.S. ambassador to Spain Eduardo Aguirre tried to appeal to Spain’s interest in keeping the “Black Swan” treasure. In exchange for U.S. cooperation in protecting Spain’s interest in the shipwreck, Aguirre would get assistance in navigating the return of a painting — an 1897 Impressionist city scene by Camille Pissarro — to U.S. citizen Lily Cassirer, who was forced to sell the picture for a few hundred dollars to obtain an exit visa as she fled Germany in 1939. Cassirer is now deceased and her heirs are seeking the painting.

The painting is now in the collection of a Madrid museum, the Thyssen-Bornemisza, and the museum refuses to return the painting.

The cable stated that although the two claims were on different legal tracks, “it was in both governments’ interest to avail themselves of whatever margin for manouevre they had, consistent with their legal obligations, to resolve both matters in a way that favored the bilateral relationship.”

In Odyssey Marine’s lawsuit to gain title to the coins, the U.S. government filed a brief with the court that sided with Spain.

Greg Stemm, Odyssey CEO, has stated, “The possibility that someone in the U.S. Government came up with this perfidious offer to sacrifice Odyssey, its thousands of shareholders, and the many jobs created by the company in exchange for the return of one painting to one individual with political connections is hard to believe.”

Melinda MacConnel, Odyssey vice president and general counsel, stated in a press release: “Since the U.S. State Department first became involved in the ‘Black Swan’ case, we’ve questioned its motives, especially given that its view of sovereign immunity is contrary to the position always advanced by the US Government prior to this case. These Cables may explain the inconsistency. We will certainly be interested to follow up with this new evidence and determine its relevance to the case and the appeal.”

Stemm added in a press release: “I think that the Cables make it clear through official sources that Odyssey has always bent over backwards to work cooperatively with the Spanish Government — something that was denied by certain Spanish officials. ...”

A hearing before the U.S. Court of Appeals for the Eleventh Circuit is scheduled to hear oral arguments in Odyssey’s appeal of the district court’s dismissal of the “Black Swan” case on Feb. 28, 2011. ¦