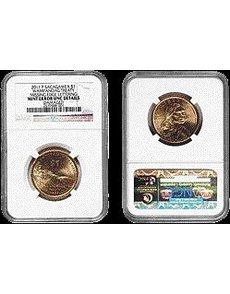 Making the discovery even more unusual, Harry Fraley of Kempster, Wis., discovered the coin positioned at the end of a roll of Denver Mint James Garfield Presidential dollars he purchased directly from the U.S. Mint.

Upon discovering the Native American dollar at the end of the roll, Fraley opened the roll and found that the coin had a plain edge, missing the legend E PLURIBUS UNUM, the date and Mint mark normally incused on the edge of the coin.

Though the coin’s Mint of origin is unknown, struck at either the Philadelphia or Denver Mint, the year of the dollar is known because it bears the Wampanoag Treaty reverse, used only on 2011 Native American dollar strikes.

The coin bears noncirculation type damage on both its obverse and reverse; more specifically, there is a peculiar “ring” pattern which appears just inside the rim on each side of the coin and scratch patterns appear on the coin’s reverse.

According to error specialist David Camire of NGC, who examined the dollar for the third-party grading service, the damage could have occurred as a result of the coin being lodged in Mint machinery.

NGC records only one 2010 Native American, Plain Edge dollar in its NGC Census, a Satin Finish example from a 2010 Uncirculated Mint set that is graded Special Mint Set 65.

No record of 2009, 2010 or 2011 Native American, Plain Edge dollars appears in the online version of the ANACS Population Report.

The label on NGC’s encapsulation of the 2011 Plain Edge dollar mistakenly bears the date/Mint mark combination “2011 P,” whereas it should not bear any Mint mark reference, an occurrence that Camire attests to as a “clerical error” on the part of NGC.

Camire stated that NGC will provide a corrected encapsulation label if the owner desires to return the coin to the grading service. ¦