2010 Proof set sales could be lowest in years 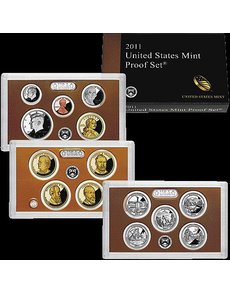 Sales of the 2010-S Proof set were poised Dec. 27 to be the lowest for a standard Proof set since 1959, barring any final flurry of purchases before the Dec. 30 cessation of sales.

Dec. 30 was scheduled as the final day that customers could place orders with the U.S. Mint for any remaining examples of 2010 annual coin sets, including the standard 14-coin set.

While the sales figure for the 2010 set is low by recent standards, one has to look at the history of recent Proof set offerings from the U.S. Mint for a better understanding of the sales trend.

The fall-off of sales, especially noticeable in the 1990s, could be attributable in part to an increase in the number of Proof set options available to Mint customers.

From 1950 to 1982, the Mint offered a single Proof set annually (with none offered from 1965 to 1967). Those offered through 1964 contained a dime, quarter dollar and half dollar composed of 90 percent silver. Silver was dropped from the dime and quarter dollar with the 1968-S set; the silver content of the half dollar was reduced starting with the 1968-S set and eliminated altogether in 1971.

Proof set options began to grow when a Prestige Proof set, containing a standard Proof set plus one or two commemorative coins, was offered starting in 1983 and 1984, and annually from 1986 through 1997.

Beginning in 1992, a Silver Proof set option was offered annually; those sets offer dimes, quarter dollars and half dollars with the traditional 90 percent silver composition. In addition, specially packaged sets, called Premiere Proof sets, were offered for a few years starting in 1992.

In 2005, 2006 and 2007, an American Legacy Collection was offered — essentially the old Prestige Proof sets, consisting of a regular set and two commemorative coins each year.

In 2009, a four-coin Proof set of Lincoln, Bicentennial cents was offered.

The U.S. Mint is still taking orders for the same set options containing 2011 coins and will continue to do so while inventory remains or until Mint officials announce a specific cutoff date. Sales of 2011 sets are likely to run through the end of calendar year 2012.

Any sets that remain in inventory after a coin program has been closed and sales reconciled are deconstructed, with the coins removed for melting and the metal reclaimed.