2010 ATB order limit one per household 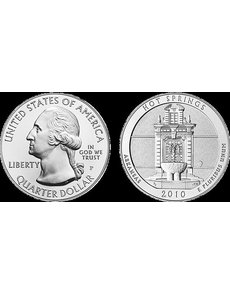 Collectors interested in ordering the Uncirculated 2010-P Hot Springs National Park 5-ounce silver bullion coin beginning at noon April 28 will be limited to one coin per household during the first week of sales.

The U.S. Mint has set an initial order limit of one per household for the Uncirculated 2010-P Hot Springs National Park 5-ounce silver bullion coin, which goes on sale at noon April 28.

Orders will be limited to one coin per household for the first week of sales. At the end of one week, U.S. Mint officials will re-evaluate this limit and either extend, adjust or remove it.

The opening price of the coin is $279.95 but, as is the policy with all coins produced in precious metals, is subject to change.

The coin is the first numismatic version of the 3-inch, 5-ounce coin issued under the America the Beautiful coin program. The coin bears on the obverse the P Mint mark of the Philadelphia Mint where the coins were struck.

Orders for 5-ounce silver Uncirculated 2010-P America the Beautiful silver bullion coins will be accepted online at www.usmint.gov/catalog or by telephone at (800) 872-6468. Hearing- and speech-impaired customers with TTY equipment may order at (888) 321-6468.