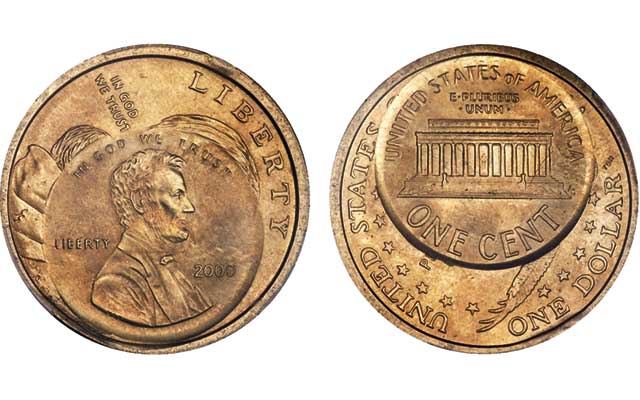 One of the oddest and most visually impressive error coins to cross the auction block in recent memory is this 2000 Lincoln cent struck over a Sacagawea small-sized dollar coin. Graded MS-66 by Professional Coin Grading Service, it sold for $35,250.

Double-denomination errors are popular with collections, but the typical example is a Lincoln cent struck on a Roosevelt dime. On this head-scratcher Heritage writes, “The first strike was normal, between Sacagawea dollar dies on a Sacagawea manganese alloy planchet. Somehow, despite the great disparity of diameter, the coin ended up between Lincoln cent dies, and was struck a second time. The collar die was either absent, or unable to rise above the anvil die due to the large dollar diameter.”

While the dollar coin’s date is obscured, since the Sacagawea dollar was introduced in 2000, both coins likely date from 2000.