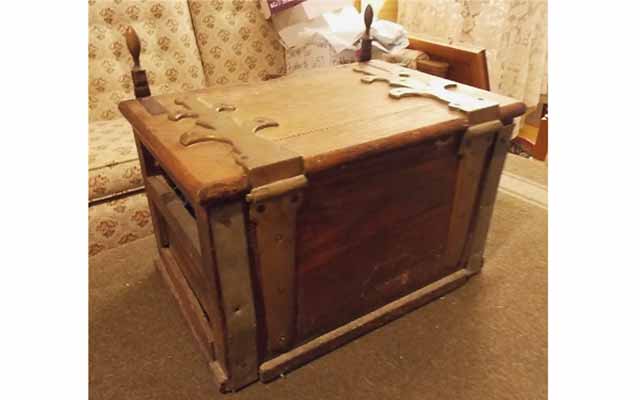 This 19th century wooden wooden box is believed to have been used for the transportation of U.S. Mint coinage dies during the 19th century. 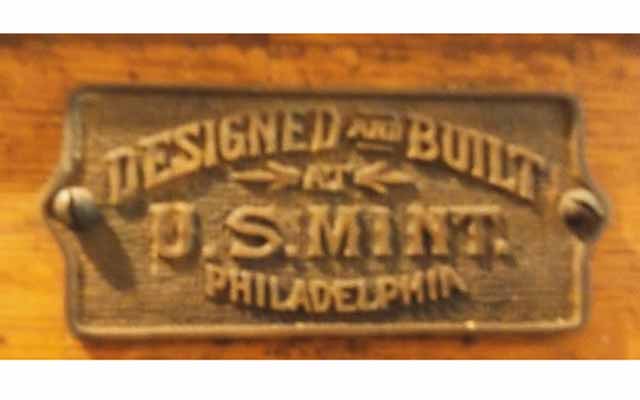 The wooden box has affixed to its outside a metal plate attesting to its design and manufacture at the U.S. Mint in Philadelphia.

In the first installment of a  two-part article launched in the July issue of Liberty Seated Collectors Club's electronic newsletter, The E-Gobrecht, numismatist Paul Kluth examines a 19th century oak box that may have been used to transport dies from the Philadelphia Mint.

The oak box, measuring roughly 18 inches long, 12 inches wide and 11 inches high, was acquired approximately 30 years ago by coin dealer Richard Gross, who specializes in early numismatic Americana. Affixed to the outside of the box is a bronze plate inscribed  DESIGNED AND BUILT / AT / U.S. MINT / PHILADELPHIA.

Kluth writes it has been suggested also that the box "may have been used to store cylindrical weights for the large and highly engineered scales used to weigh gold and silver bullion upon receipt and to weigh struck coin before delivery."

"This explanation could be very plausible given the fact that the main Mint in Philadelphia and each Branch Mint / Assay Office would use heavy, precision scales," Kluth writes.

In Kluth's Part II conclusion, published in the Summer 2015 issue of the LSCC's print publication, The Gobrecht Journal, the writer addresses other possible uses for the box, for which no official Mint documentation has yet been uncovered. Some other uses suggested include shipment of bullion and/or struck coins or other materials moving between Mint production facilities and Assay Offices.

Part I and access to earlier issues of The E-Gobrecht can be found here.