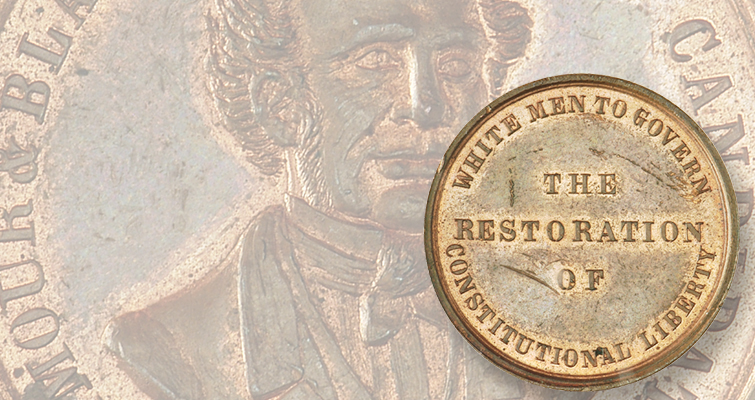 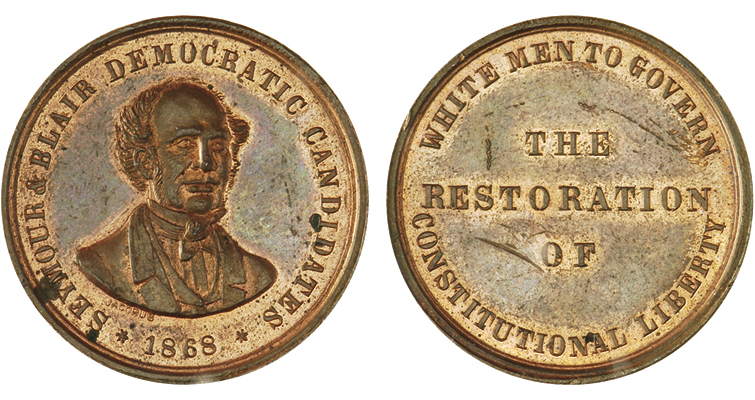 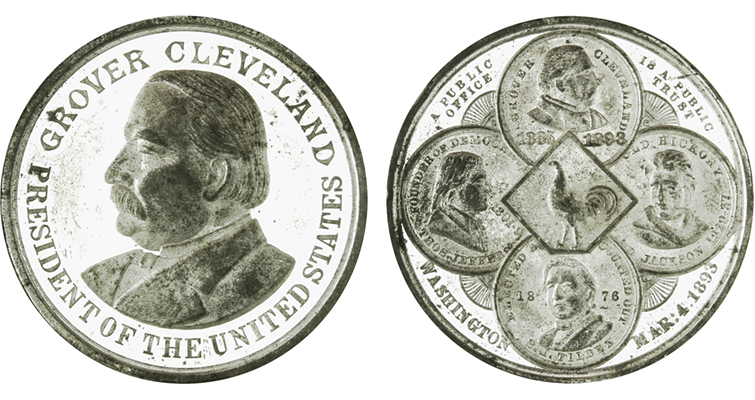 The small roundel bust at the bottom on the reverse of an 1893 Grover Cleveland medal harkens to Samuel J. Tilden's 1876 Presidential popular vote win negated by a manipulation of the Electoral College.

The story of American presidential elections offers fascinating also-rans, candidates defeated in hard-fought elections who then receded from public memory. Noteworthy are two 19th century Democratic standard-bearers whose stories are remembered largely through campaign and celebratory medals of 1868 and 1893.

The first Democratic candidate to run for president after the Civil War was New York’s 18th governor, Horatio Seymour. He and other Democrats urged reconciliation with the defeated and occupied South, then undergoing Reconstruction and the social upheavals that followed Emancipation of the black population.

Seymour and running mate, is Gen. Frank P. Blair of Missouri, were defeated by Republican war hero Ulysses S. Grant, in part because of the unabashed rascist tone of their campaign. This is unmistakable on the 30-millimeter medal by Peter H. Jacobus (DeWitt 1868-5, Century of Campaign Buttons 1789 - 1889 by J. Doyle DeWitt) with its plea for the RESTORATION OF CONSTITUTIONAL LIBERTY, WHITE MEN TO GOVERN. The first reasonable stand was overshadowed by the racist tones of the second cry, which helped defeat the ticket.

Somewhat more startling was its inclusion of a small roundel bust of also-ran Samuel J. Tilden of New York, who won the popular vote in the bitterly disputed 1876 election almost 20 years before. Famed as a political reformer, Tilden was deprived of victory by Republican manipulation of the Electoral College. The electoral votes of several Southern states still under U.S. Army occupation, were accepted and tipped the balance for Republican Rutherford B. Hayes. Tilden had to discourage outraged supporters who urged an uprising if necessary to send him to the White House.

No 1876 medals hailing Tilden’s renunciation were issued, but the 1893 Cleveland medal reverse looked back with his bust and the downright claim ELECTED AND COUNTED OUT.

No other candidate could make this statement and this was the only medal recording the shabby outcome of this vigorously contested Presidential election.