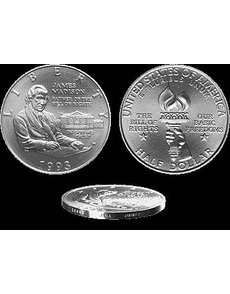 Of the Uncirculated 1993-W Bill of Rights silver half dollars produced, thousands were privately serial-numbered on the edge, after striking, for inclusion in a Freedom Pack product jointly issued by the American Numismatic Association and James Madison Memorial Fellowship Foundation.

The 1993 Bill of Rights silver half dollar is unique in that thousands of the Uncirculated half dollars were privately marked on the edge with a serial number, the result of a shared initiative between the American Numismatic Association and the James Madison Memorial Fellowship Foundation.

The edge lettering was added by the Winchester, Ind., private mint SilverTowne. To accomplish this, a portion of the reeded edge on each Uncirculated coin was removed to allow the incused initials of the two sponsoring organizations — ANA and JMMFF — and a serial number to be applied to the coins.

The ANA said that the metal removed from each coin resulting from the alteration would not be significant enough to bring the coin below its statutory weight of 12.5 grams.

The altered coins were offered as part of a “Freedom Pack” and sales were launched in July 1993, during the ANA 102nd Anniversary Convention in Baltimore. The sets were priced at $19.95 each or offered free to individuals or clubs renewing their ANA memberships for five years.

At the time, the ANA said that more than 700 Freedom Packs were distributed through membership renewals.

The price of the Freedom Pack sets represented a steep increase from the prices for similar Mint-issued sets. For example, in the Bill of Rights program, the Mint’s Young Collectors Edition, which featured an Uncirculated 1993-W Bill of Rights half dollar, was priced at $9.75 a set during the pre-issue period.

While the privately edge-lettered coin was advertised as the first limited-edition, privately numbered U.S. commemorative coin since 1925, when 1925 Stone Mountain half dollars were privately numbered and offered for sale at premiums, many collectors criticized the ANA for participating in a program that altered coins and had the potential to create manufactured rarities.

While collectors did buy more than 9,650 sets in addition to the 700 sets given to renewing ANA members, the demand was not sustained and a modern rarity was not created. Today, “Freedom Packs” are available in the occasional online auction for around $20, representing no premium over the initial issue price and just a small premium above the $18 for which normal Uncirculated coins trade.

The ANA claimed that the endeavor was a success, but the project also succeeded in polarizing the hobby.