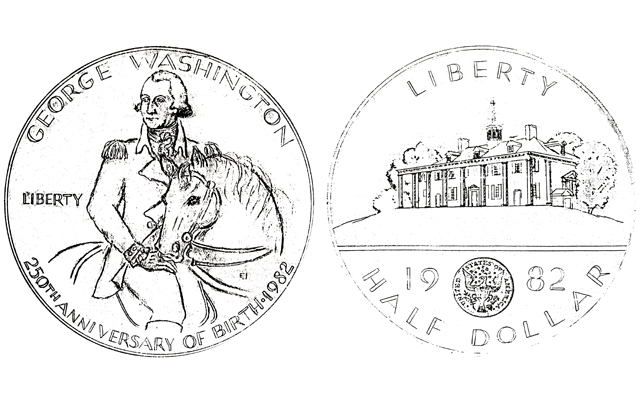 Elizabeth Jones's sketches for the obverse and reverse designs of the 1982 Washington commemorative half dollar.

President Reagan’s signing into law Dec. 23, 1981, legislation calling for the issuance of a half dollar in 1982 commemorating the 250th anniversary of George Washington’s birth brought excitement and great collector expectations.

The authorization of the first U.S. commemorative coin in more than a quarter century also brought excitement to the Philadelphia Mint, where the chief sculptor-engraver, Elizabeth Jones, was getting settled in, having been sworn into office Oct. 27, 1981. Her first assignment would be designing the new coin.

Authorizing legislation mandated that designs for both the obverse and reverse of the coin be “emblematic” of the Washington anniversary, but did not dictate any specifics. Thus, Jones was able to work without restraint.

Jones immediately decided that she would like to create a nontraditional likeness of Washington. On the three previously issued U.S. coins depicting Washington (1900 Lafayette Monument dollar, 1926 Sesquicentennial half dollar, and the circulating Washington quarter dollar), he had been shown in standard, traditional busts.

The new chief sculptor-engraver chose to show Washington on horseback, in military uniform, at approximately age 50. She studied facial details of the various Washington portraits in major museum collections that she could identify as having been painted from life sittings. She drew inspiration from Rembrandt Peale’s painting depicting Washington astride a horse that she found in the portrait gallery of the Second Bank of the United States building in Philadelphia. And Thomas Sully’s portrait of Washington on horseback in the Union League Club in Philadelphia also influenced her work.

On the reverse, Jones considered depicting Wakefield, Washington’s birthplace. But she abandoned the idea when she learned that the house standing at Wakefield is not an original structure. Instead she decided to show Mount Vernon.

Jones, a sculptor used to working in 3-D, was asked by Mint Director Donna Pope to submit obverse and reverse sketches so the designs could be approved by the Commission of Fine Arts and by the secretary of the Treasury.

Unfazed, Jones continued refining the designs on the plaster models until the moment it was time to make galvanos and dies.