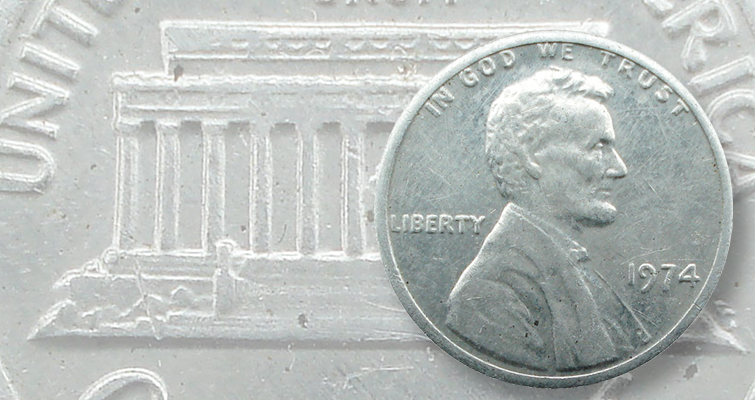 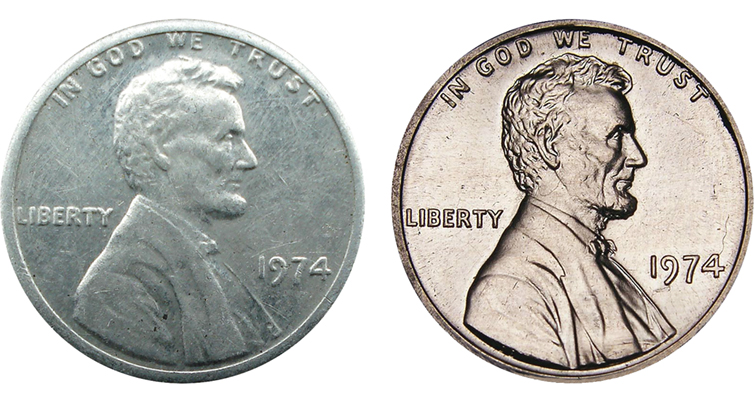 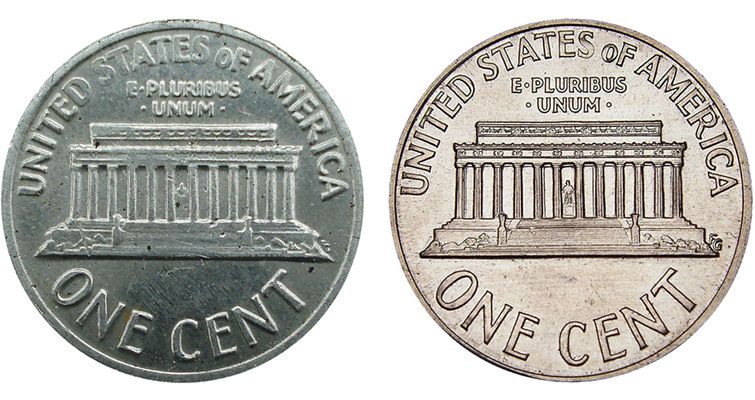 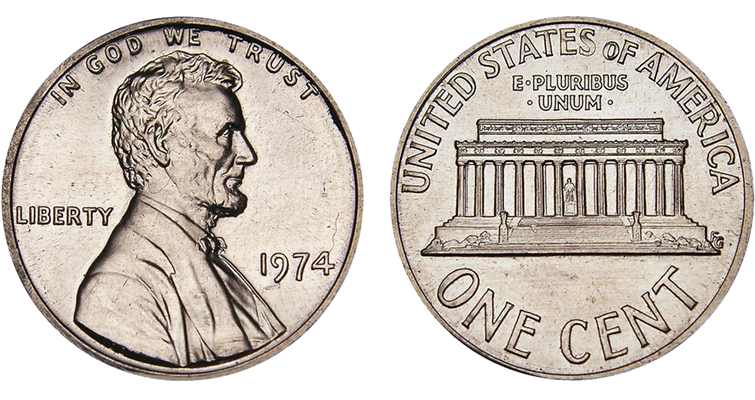 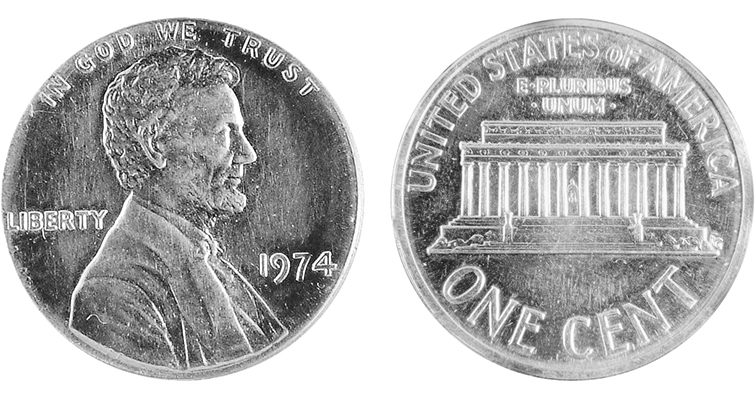 Just two genuine examples of the 1974 Lincoln cent struck in aluminum are publicly known, so it was only a matter of time before counterfeits would begin to surface.

A U.S. collector, Jonathan Brecher, paid roughly $5, including shipping, to acquire in an April 30, 2017, eBay auction what was offered as (and appears at first glance to be) a 1974 Lincoln aluminum cent.

The seller is identified as being from Liepaja, Kurzeme, Latvia.

The Latvian seller responded to Coin World’s inquiry about the piece by advising that it was a “souvenir copy,” although it was not advertised as such.

While the weight of Brecher’s purchase is close to that of a genuine aluminum cent, Brecher says it is obvious the piece is counterfeit.

“The dies are HEAVILY polished, with massive detail loss across the board,” Brecher said in a May 17 post on the U.S. Coins Forum on the Collectors Universe Message Boards. “Look especially at Lincoln’s coat, which blends into the field.

“There is no sign of V.D.B. initials [of cent designer Victor D. Brenner] on the truncation of the bust. None of these features match the example in the Smithsonian.

“Additionally, all of the lettering has a ‘mushy’ or ‘pitted’ quality that is never seen on US Mint products.

“I think this is a spark erosion counterfeit, where the surface of the die was polished smooth to remove the pitting in the fields.

“That polishing removed much of the details, and wasn’t able to remove the pitting from the design elements that were recessed on the die. Once you have counterfeit dies at all, you can strike them on anything. I’m not an expert on counterfeits; maybe someone else can provide more details.

“I’ve never seen even a counterfeit aluminum cent, so I’m happy enough with my $5 purchase for what it is.”

The Treasury Department considered the use of aluminum and bronze-clad steel, among other compositions, as possible alternatives for the Lincoln cent amid rising copper prices. The copper crisis eventually abated, negating the need for the composition substitute, and the 95 percent copper alloy was retained until 1982.

Of the only two genuine 1974 aluminum cents verified, one is in the National Numismatic Collection at the Smithsonian Institution’s National Museum of American History.

The other example is in private hands, initially discovered in 1973 by a purported U.S. Capitol police officer, who, when trying to return the coin to an unnamed congressman who had dropped it, was told to keep it.

The coin was crossed over two months later in 2005 to a Professional Coin Grading Service holder where it was labeled Mint State 62.

Although examples of the 1974 Lincoln aluminum cent and its bronze-clad steel counterpart are considered by U.S. Mint officials to be experimental prototypes and illegal to own, federal authorities, including at the Mint, have been in no great hurry to seek confiscation of the examples in private hands.

Coin World recently learned that the 1974 aluminum cent once held by heirs of the U.S. Capitol police officer who found it has been sold, and it is currently held by an East Coast collector.

The Denver Mint also struck a handful of 1974-D Lincoln cents as experimental pieces on aluminum planchets, but U.S. Mint officials claim that production was not authorized.

An extant example that had been given to Denver Mint Assistant Supt. Harry Lawrence upon his retirement in 1980 was scheduled to go to auction in 2014, consigned by Lawrence’s son, Randall, and Michael McConnell, the La Jolla, Calif., dealer that the younger Lawrence had consulted.

The 1974-D aluminum cent was withdrawn from the auction and eventually voluntarily turned over to U.S. Mint officials in March 2016, ending federal officials’ pursuit of legal options to seize it.