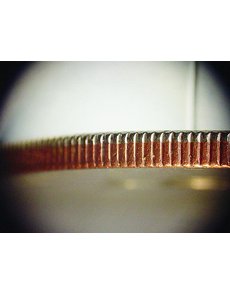 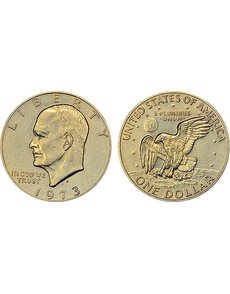 An Eisenhower dollar recently obtained at face value from a California bank has been authenticated as a 1973-S dollar struck on a copper-nickel clad planchet instead of the intended silver-copper clad planchet.

Collector Lee Lydston submitted the coin to Numismatic Guaranty Corp., which certified the coin as a wrong planchet error and graded it About Uncirculated 58.

Lydston’s coin is only the second such wrong planchet error involving a 1973-S Eisenhower dollar that NGC has certified.

The discovery piece, which NGC graded Mint State 67, was obtained in September 2008 by John Wrublewski from Pioneer Numismatics in Acton, Mass. Wrublewski’s Uncirculated coin was housed in its original “Blue Ike” packaging from the U.S. Mint, and was contained in a coin lot he purchased for $150 at auction. Wrublewski’s coin, which he figured cost him $6, has been subsequently valued in the five figures.

The weights of both error coins are near the standard 22.68-gram weight of the copper-nickel clad coins instead of the 24.59-gram weight for the silver planchets.

The edges of both Lydston’s and Wrublewski’s coins exhibit the exposed copper core, instead of the silver edge of the silver coins.

Lydston said he was returning a $1,000 face value bag of Kennedy half dollars to the bank when he asked a teller if she had any unusual coins for him to examined. Lydston said the teller handed him three Eisenhower dollars – one was a 1971-D dollar, one a 1972 coin and the third a 1973-S coin.

Lydston said he looked at the first two coins looking for the rare Type 2 reverses on both coins, but both were Type 1s.

“I wasn’t that impressed with finding a 1973 in circulation even though these were ‘mint set only’ coins and I’ve gotten them really cheaply in a raw state from local coin dealers but this one, looked fairly clean for a circulated coin,” Lydston said. “Almost with a satiny finish. I figured, what the heck, and plunked down my buck for the coin.”

Lydston said copper-nickel clad dollars typically have “a fair amount of Mint luster or shine, if you will, even when circulated. This coin was not particularly lustrous and had more of a clean, satiny finish, which is what caught my eye.”

He said “making the decision to ‘drag yet another Ike home’ was based more upon the appearance of the coin coupled with its date than simply the date of the coin.”

“Being sensitive to the prolific counterfeiters out of China, I then took it to the scope for a close up look at the finish,” said Lydston, who specializes in Eisenhower dollars. “The coin definitely had the crisp quality of a U.S. Mint product and certain die markers from 40 percent silver 1973-S Ike’s were quite evident on the reverse eagle’s breast.

“The surfaces showed wear from circulation contact, but the protected area’s near the devices were satiny smooth.” ¦