1969-S DDO cent surfaces in hoard sold by a collector 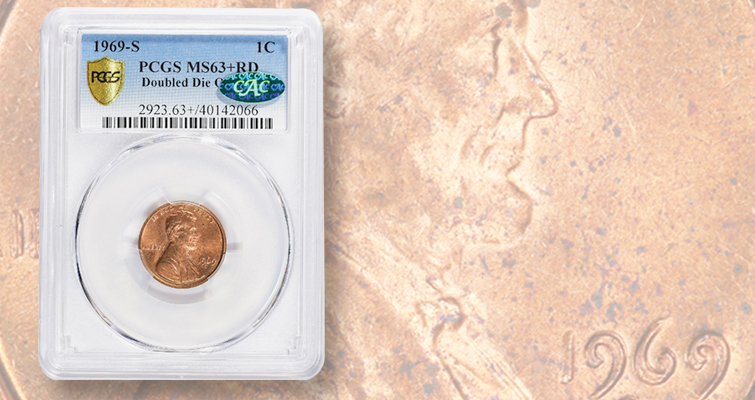 1969-S Doubled Die Obverse Lincoln cent is from a collection of thousands of Lincoln cents amassed by a collector over a 50-year period.

An Uncirculated 1969-S Lincoln cent sold by a San Francisco collector to a dealer for 5 cents, from within a hoard of several thousand cents the collector amassed over 50 years, was later determined to be the rare doubled die obverse variety, worth more than $40,000, according to auction house GreatCollections.

The doubled die cent is one of fewer than 100 examples known of the DDO #1 variety.

The coin, subsequently certified as Mint State 63+ red by Professional Coin Grading Service and stickered by Certified Acceptance Corp. for being exceptional within the grade, is headed to auction online by GreatCollections. The auction will have a closing date of Dec. 13 and the coin is offered without reserve.

The unnamed San Francisco collector wants to remain anonymous, according to GreatCollections President Ian Russell. The cent hoard was an accumulation of thousands of Lincoln cents from change, friends and roll searching.

Finding nothing of note, the unnamed collector decided to sell the collection and obtained several offers from local numismatic dealers. Based on what he accepted to liquidate his holdings, each coin in the collection averaged to about 5 cents, according to Russell.

Later, when examining the cents individually, the dealer made the doubled die discovery.

“The dealer instantly called the collector who sold him the collection, and arranged to return the coin to him,” Russell said. “Although he never told the collector the estimated value, he made him aware that the coin was very valuable, and certainly should not be sold before it could be professionally graded and authenticated.”

The coin was consigned to GreatCollections, still in its original paper envelope into which the collector put it.

“The dealer is not getting anything out of it, he is wanting to remain anonymous as well, although I am talking him into letting me tell people his name — it might not be for a few months though,” Russell said in response to questions from Coin World. “The original collector is receiving all proceeds. The dealer likes to fly under the radar. He joked with me that he didn’t even get his 5 cents back when he handed over the 1969-S DDO to the original owner.”

Russell said that between 4,000 and 5,000 coins total composed the hoard, all stored in small paper envelopes.

“Although there are many reproductions and even genuine coins with inconsequential machine doubling, we knew instantly the coin was the major doubled die and genuine, and arranged for the coin to be graded by PCGS,” Russell said. “The elderly owner of the coin really hit the jackpot that after selling the coin for 5 cents, the honest dealer returned it to him without question.

“While the dealer is wishing to remain anonymous at this point in time, I hope one day to be able to disclose his name, since he deserves praise for how he handled the transaction.”

The record auction price for a 1969-S Lincoln, Doubled Die Obverse cent is $54,625 realized in an Oct. 22, 2009, sale by Heritage Auctions for an example graded About Uncirculated 55 by PCGS.

According to the auction lot description, “The 1969-S Doubled Die was produced during the manufacture of coinage dies at the Philadelphia Mint, which until 1996 was the sole supplier of dies to the various branch mints.

“One of the last steps in production of the finished dies was the application of a Mint mark via a punch tool,” according to the lot description. “The working die for the 1969-S Doubled Die was produced when it shifted during annealing or work-hardening, between squeezes or impressions from a working hub. So the true 1969-S Doubled Die, while it shows remarkable separation between the doubled numbers and letters, shows no doubling on the mint mark, which was added later on. The separation between LIBER, IN GOD WE TRUST, and the date on the 1969-S Doubled Die is so great that there is ‘open space’ between many of the characters. The strike-doubled 1969-S cents show somewhat flat, shelflike edges to the doubled legends, and the ‘separation’ between the doubled images is minimal.” 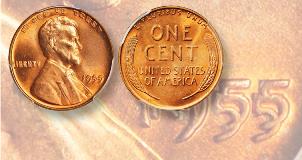 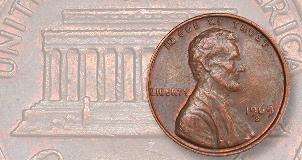 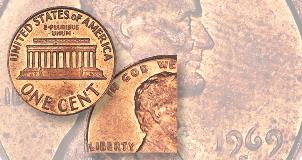