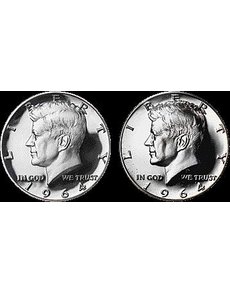 Of the 4 million Proof 1964 Kennedy half dollars, consensus is that about 100,000 are Type 1, Accented Hair coins, left, and the rest are the Normal Hair, or Type 2 version, right.

Two distinct types of the Proof 1964 Kennedy half dollar exist – the scarce Accented Hair (Type 1) and the “normal” issue (Type 2).

From a mintage of nearly 4 million Proof 1964 Kennedy half dollars, consensus seems to place only around 100,000 pieces among those of the Accented Hair variety.

Today the Accented Hair type is collected both by Kennedy half dollar aficionados and, increasingly, by type set collectors seeking to add an interesting and distinctive design subtype.

A classic story is attached to these coins as Gilroy Roberts — the chief engraver of the U.S. Mint who designed the obverse of the Kennedy half dollar — recalled that Kennedy’s widow, Jacqueline Kennedy, asked him to downplay the part in the president’s hair. Roberts said that Mrs. Kennedy wanted the president’s hair to appear more tousled, so tradition has it that the “normal” variety is the one that benefited from Mrs. Kennedy’s feedback.

The obverse design for the Kennedy half dollar was based on Roberts’ 1961 John F. Kennedy presidential medal while the reverse was designed by Frank Gasparro, who succeeded Roberts as the Mint’s chief engraver in 1964, when Roberts departed for the privately held Franklin Mint.

As a preliminary step to identifying the 1964 Accented Hair Kennedy half, obviously, one looks at Kennedy’s hair. Specifically, the hair just above his ear. The Accented Hair design has two prominent strands of hair that form a V shape above Kennedy’s ear. A side by side comparison of the two subtypes makes this clearer. Another easy identifier is that the bottom-left serif in the i in liberty on the obverse is broken on the Accented Hair subtype.

On the reverse of the Accented Hair subtype, the eagle’s shield is slightly pitted and rounded at the edges while on the “normal” type the edges are squared and the shield is more uniform in texture.

Several other differences exist between the two types, although the presence of the three indicators noted above are enough to distinguish an Accented Hair coin.

Due to its relative scarcity and its increasing popularity as a type, the Accented Hair coin sells at a premium to the “normal” coin. Major grading services acknowledge the subtype and it is listed in standard reference books.

Typical certified Proof 66 examples with little cameo contrast can be found for around $70, supported by recent results in online auctions. Although many Accented Hair examples have mild cameo contrast, deep cameo examples are rare. One graded Proof 68 Deep Cameo by Professional Coin Grading Service sold for $11,500 at a 2009 Heritage Auctions sale.