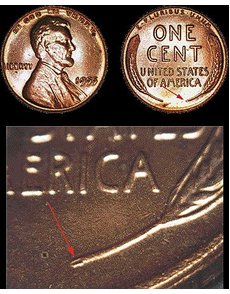 While they look like the obverse and reverse of a 1955 Lincoln, Doubled Die Obverse cent with polished surfaces, these images actually show one of the more than a dozen known counterfeit versions. Arrows point to the diagnostic depression on the tip of the right wheat stalk.

The 1955 Lincoln, Doubled Die Obverse cent continues to be one of the most popular U.S. die varieties.

High demand for this variety exists for two reasons: it is part of the Lincoln cent series, which is the most collected U.S. coin design; and the doubling is amazingly strong, with, for most collectors, easily seen separation of the two images, without the need for magnification.

Even though tens of thousands of 1955 Doubled Die Obverse cents were struck, the demand exceeds the supply by enough that current prices for this coin remain high.

Unfortunately, with prices this high, the 1955 Lincoln, DDO cent has attracted the attention of counterfeiters and alteration experts for decades, to the point that more fakes than genuine coins are probably available on the market.

We see one particular counterfeit often enough at ANACS that it needs to be burned into the memory of all Lincoln cent collectors.

Luckily, this fake has an easy diagnostic that can be spotted at a glance, even under poor lighting conditions. The fake has a depression at the bottom tip of the right wheat stalk that makes the tip appear to be split. I have never seen a genuine 1955 DDO Lincoln cent with this defect, so any coin that exhibits this depression should be assumed to be a counterfeit.

This fake has other diagnostics, including an edge that is much sharper than the rounded, beveled edge found on a genuine coin, but the depression on the right wheat stem is the key.

Keep in mind that this defect was on the fake die used to produce this counterfeit, so it will be identical on every fake struck from this die.

Most importantly, this is one specific counterfeit of the 1955 Lincoln, DDO cent.

The absence of this depression does not mean that the coin is genuine — at least a dozen other fakes are in our files.