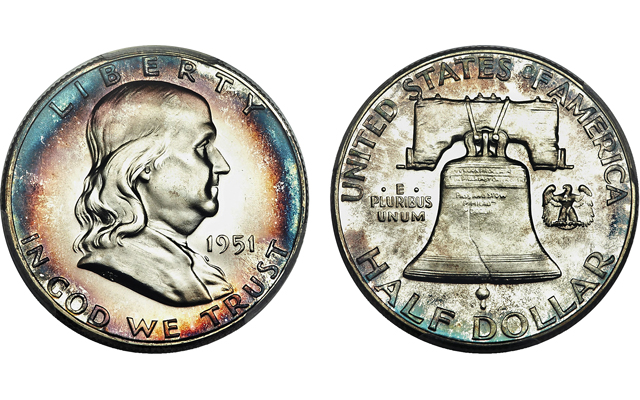 A beautifully toned 1951 Franklin half dollar graded Proof 68 by PCGS sold for $4,465 at the June 4 Heritage Long Beach auction.

The Story
This 1951 Franklin half dollar graded PCGS Proof 68 is one of just two in this grade at PCGS and is used to illustrate the issue at the PCGS CoinFacts site.

It’s from a relatively low mintage of 57,500 pieces, and while Proof 67 examples can sometimes be found for less than $1,000, this example is exceptional both for its absence of hairlines and for its deep blue, purple and golden toning that clings to the rims.

Cameo examples are infrequently found for this date, and PCGS has graded 18 in Proof 67 Cameo with none finer among the Cameos, while the finest Deep Cameo PCGS examples are graded Proof 66.