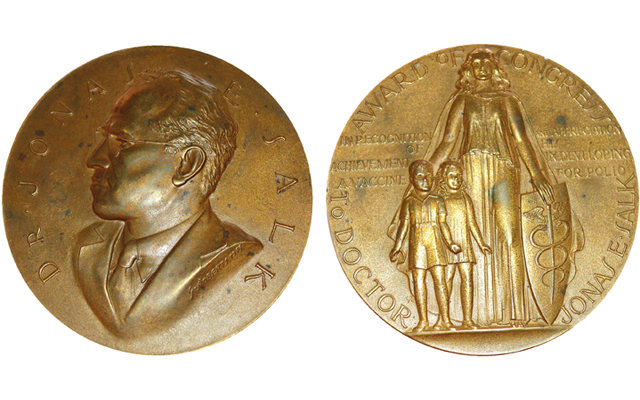 Image courtesy of milt 1 on eBay.

Polio was the scourge of childhood in the 1950s and the stuff of nightmares. It came each summer, leaving death and misery in its wake. Fearful parents everywhere prayed for deliverance or cure.

The paralyzing disease primarily attacked children, though more than a few adults, famously including Franklin Roosevelt (stricken in 1921), had taken ill, too.

On the eve of World War II, Roosevelt founded the National Foundation for Infantile Paralysis. The foundation’s annual charity drive — the March of Dimes — raised money to fight the disease.

After Roosevelt’s death in 1945, the Mint honored him by placing his portrait on the dime, a denomination chosen because of the door-to-door March of Dimes campaigns.

March of Dimes money funded Dr. Jonas Salk’s groundbreaking research — research that led to a vaccine that conquered the disease.

After Salk’s vaccine was determined to be “safe, effective and potent” April 12, 1955, Congress appropriated $30 million to pay for free vaccinations for all children, 26 million in 1955 alone.

Summers, once again, were safe. “What had the most profound effect,” Salk recalled years later, “was the freedom from fear.”

The medal was authorized in 1955 and Gilroy Roberts designed the 3-inch medal. The obverse shows Salk’s bust and is signed and dated G. ROBERTS 1955 on the truncation. The reverse shows an allegorical grouping of a woman holding a shield bearing a medical caduceus protecting a boy and a girl.

The medal was presented to Salk Jan. 27, 1956, by Health, Education and Welfare Secretary Marion B. Folsom.

Eisenhower, who had suffered a massive heart attack the previous fall, was on restricted duty and could not personally award the medal. During the ceremony Folsom read a letter to Salk from Eisenhower that said, “Through dedicated and selfless effort, in the best traditions of medical research, you have brought new hope to mankind in the continuing battle against a dread disease. …”

While Congress approved the medal, contemporary news accounts say it failed to provide the $2,500 needed to design and strike the medal. The United Press reported a “friend and admirer” put up the money.

In 2015, the nation will honor Salk, who died in 1995, with his portrait on a coin. The Citizens Coinage Advisory Committee has recommended that jugate busts of Salk and Roosevelt appear on the obverse of the planned 2015 March of Dimes commemorative silver dollar.