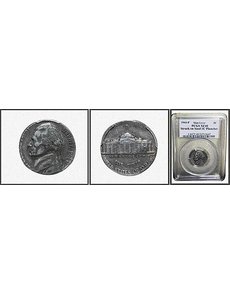 According to James Essence of the Madison, Wis., firm, “Apparently this coin was originally found by a lucky collector searching through a bag of wheat cents!”

The coin is certified by Professional Coin Grading Service and graded as Extremely Fine 40, suggesting that the coin circulated at least briefly.

Since the 1944 error coin was struck on the same planchet used in 1943 for the Lincoln cent and in 1944 for Belgian 2-franc coins produced at the Philadelphia Mint, the error could be considered both a “transitional error” and an error struck on a planchet for a foreign coin.

Although the lot description in the Jim’s Coins mail-bid sale catalog states, “NO AUCTION OR SALE RECORDS OF ANY OTHER COINS OF THIS TYPE,” at least two others are reported.

One 1944-P Jefferson 5-cent coin graded Very Fine 20 by PCGS sold in Bowers and Merena’s 2003 American Numismatic Association convention auction in Baltimore, where it realized $8,050 with the 15 percent buyer’s fee. The piece had been consigned by Bill Fivaz, a noted collector of error and variety coins.

Another example of the coin was acquired on eBay by a poster using the online identity of “jonathanb” on the Collectors Universe forums. The poster commented in a thread discussing an example of the error 1944-P 5-cent coin appearing in a November 2012 sale on eBay. “Jonathanb” posted images of the piece he acquired and stated, “I snagged one on eBay a couple years ago” for a price the writer described as “rather less than” what was realized in the 2003 auction.

Essence confirmed on Jan. 9 that the piece appearing in his mail-bid sale is the same piece that was offered on eBay by another seller in November 2012. The piece did not sell in that eBay auction.

Essence, whose firm offers frequent mail-bid sales of error and variety coins, also said he was unaware that other examples of the 1994-P 5-cent coin existed.

In the same Collectors Universe thread from November, Tom DeLorey of Chicago, another noted researcher of error and variety coins, noted, “A 1944-P nickel on a steel cent planchet is a wonderful error, but an odd duck that stands alone” in comparison to higher-profile transitional error 1943 and 1943 Lincoln cents.

Such transitional errors, which are highly prized in the collector community, resulted from compositional changes for U.S. coinage during World War II.

The United States Mint facilities at Philadelphia, Denver and San Francisco used planchets of alternative compositions for two denominations of U.S. coins during World War II and immediately afterward, from 1942 through 1946. The compositional changes were made to divert more copper and nickel — both metals used in coinage — to the American war effort.

Starting on Oct. 8, 1942, the composition of the Jefferson 5-cent coin was switched from the standard 75 copper, 25 percent nickel mix to an alloy of 56 percent copper, 35 percent silver and 9 percent manganese. This “Wartime Alloy” was used through the end of 1945, with the original composition resumed in 1946.

A minor design change was made to the reverse of the Wartime Alloy 5-cent coins. The Mint mark was enlarged and moved from its original position to the right of the base of Monticello to the fields above the structure’s dome. In addition, the P Mint mark was introduced for the first time for coins struck at the Philadelphia Mint.

The Lincoln cent underwent several compositional changes from 1942 to 1946. When the Japanese attacked Pearl Harbor in Hawaii on Dec. 7, 1941, the cent was made of 95 percent copper and 5 percent zinc and tin.

Because the Mint obtained most of its tin from Bolivia, which had to be shipped through waters patrolled by German submarines, tin was in short supply. Treasury Department officials on Jan. 23, 1942, ordered tin be dropped from the alloy once existing stocks of metals had been used up. According to researcher David Lange, it is uncertain whether tin was dropped entirely from the alloy in 1942 or the amount merely decreased. The minor change in the cent’s composition resulted in no physical difference in the cent’s appearance, Lange writes.

A more significant change to the cent’s composition in 1943, however, did change the cent’s appearance drastically, and set the stage for the production of the error 1944-P Jefferson 5-cent coin offered in Jim’s Coins’ mail-bid sale.

After testing a number of alternative compositions, including glass and plastics, Mint officials selected a new composition for the cent in 1943 — zinc-coated steel. Low-grade steel was coated with 0.0005 inch of zinc before planchets were punched from the coinage strip. The process left the steel edges of the planchets and cents uncoated with the zinc.

Normal 1943 Lincoln cents, when newly struck, had a bright, silver color. However, the zinc-coated steel reacted quickly to environmental factors, and the cents quickly darkened and rusted. Mint officials switched back to a 95 percent copper, 5 percent zinc alloy from 1944 through 1946, with copper-based spent cartridge cases used to supply some of the metal.

A small amount of tin was restored to the cent alloy in 1947.

The use of multiple compositions for cents and 5-cent coins resulted in the creation of a number of off-metal pieces during World War II.

The most famous of these pieces are the 1943 Lincoln cents struck on copper-alloy planchets. These copper cents, indistinguishable in color from all other Lincoln cents struck from 1909 to 1942 and afterward, could have been struck in error on left-over planchets from 1942, or possibly deliberately in late 1943 during testing for the resumption of a copper-alloy cent in 1944.

Copper-alloy 1943 Lincoln cents were struck at all three Mint production facilities. All are rare, with just one 1943-D cent struck in bronze known from the Denver Mint. The latter unique cent sold in a private transaction for $1.7 million in September 2010. Examples of the Philadelphia Mint and San Francisco Mint 1943 bronze cents have realized more than $200,000 at public auction in the 21st century.

In addition, some 1944 Lincoln cents were struck on zinc-coated steel planchets of the type used for the 1943 cents. These coins can also bring six-figure prices.

The Mint continued to use the zinc-coated steel planchets in 1944 to strike 1944 2-franc coins for Belgium, an American ally during the war. All of these 2-franc coins were struck at the Philadelphia Mint facility.

Wrong composition Jefferson 5-cent coins from World War II are also known, though they have not attracted as much attention as the 1943 bronze and 1944 steel cents, and prices tend to be lower for the error 5-cent coins.

Several other war-era 5-cent coins are what are generally called “transitional errors” — pieces struck on planchets of a composition intended to be used in a different year.

Among them is a purported transitional 1942-P Jefferson 5-cent coin bearing the large P Mint mark on the reverse that was struck on a copper-nickel planchet rather than on a copper-silver-manganese planchet. In addition, at least five transitional 1944-P Jefferson 5-cent coins are known struck on the standard copper-nickel planchets.

The Jim’s Coins mail-bid sale offers more than 500 lots of exclusively error coins and paper money. “Many pieces come from an old-time hobbyist who only collected rare and spectacular errors, and whose collection has been off the market for many years,” according to the firm.

A free digital catalog is available by sending an email request to jimscoins@sbcglobal.net, or by telephoning the firm at 608-233-2118. ¦