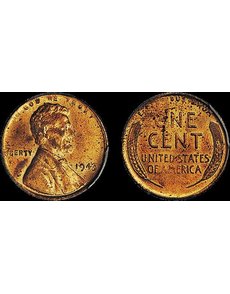 Stack’s Bowers Galleries will offer on Jan. 24 the above 1943 Lincoln bronze cent that is struck on a planchet of unknown purpose.

A 1943 Lincoln cent struck on a bronze planchet of a composition whose purpose cannot be determined is crossing the auction block Jan. 24 in New York City.

The unique composition cent will be offered by Stack’s Bowers Galleries as part of its Rarities Night session during its Jan. 22 to 24 New York Americana Sale.

The composition of the bronze 1943 Lincoln cent consigned to the Stack’s Bowers Galleries auction is 91.7 percent copper, 7.5 percent zinc, and 0.8 percent silver, according to an elemental analysis arranged by PCGS.

The wrong-planchet error was consigned for auction by a New England family, one of whose members found the rarity in a roll of Lincoln cents decades ago, according to Stack’s Bowers.

Lincoln cents struck in 1943 at the Philadelphia, Denver and San Francisco Mints were intended to be produced on zinc-coated steel planchets. The composition was changed from a bronze alloy to zinc-coated steel to conserve the much-needed copper for war efforts.

According to the analysis, the composition used for the coin in the auction not only does not match the expected specifications for a 1942 Lincoln cent, it also did not match any of the known compositions for similarly sized world coins struck at the Philadelphia Mint.

The bronze 1943 cent to be offered by Stack’s Bowers was first inspected at the firm’s Wolfeboro, N.H., premises by numismatists John Pack and Melissa Karstedt.

“My initial impression was that the coin was struck at the U.S. Mint, but both the strike and color of the planchet raised some question as to the exact nature of the piece,” Pack said.

According to Pack, since the zinc-coated steel planchets of 1943 were harder than those leftover copper ones intended for the 1942 coins (and so required a higher striking pressure), and the errors were, in theory, struck from fresh 1943 dies, the expectation is that error coins struck on leftover planchets should be sharply struck throughout, but this coin is not.

Secondly, according to Pack, the somewhat lighter tone would be unusual for a 1942 bronze planchet, though less so for the shell-casing alloy planchets used on cents of 1944 to 1946.

Pack’s secondary supposition was that the consigned cent might be a coin struck on a planchet intended for a world coin, as it is well known that the United States Mints were striking millions of coins for several governments at that time.

The bronze 1943 cent was sent to PCGS for examination and additional analysis to address Pack’s suspicions.

An upcoming book by Burdette focusing on the wartime coinage experiments reveals, according to Stack’s Bowers, “that the Philadelphia Mint struck experimental cents in late 1943 to test the production of the shell-casing planchets in preparation for their large-scale use in 1944.”

“Further, the Mint documented these tests by date and recorded that 1943-dated cent dies were used, also giving compositions for the test planchets,” according to Stack’s Bowers. “This piece of data was fascinating, and the thorough presentation in Burdette’s coming work might well change the way certain ‘errors’ of this period are studied, including 1943 bronze cents now in collections.

“However, in regards to the present coin, it provides no concrete answer, as the composition did not match those recorded for these experiments, either.”

According to a January 2011 census published in Coin World, 13 examples are known of the “standard” 1943 bronze cent, one for the 1943-D cent in bronze and seven examples of the 1943-S bronze cent.

Prices for the coins are among the highest for any small cents.

For more information on the New York Americana Sale, contact Stack’s Bowers Galleries on the East Coast toll free at 800-566-2580 or on the West Coast at 800-458-4646. Email the firm at info@stacksbowers.com or visit at www.stacksbowers.com. ¦