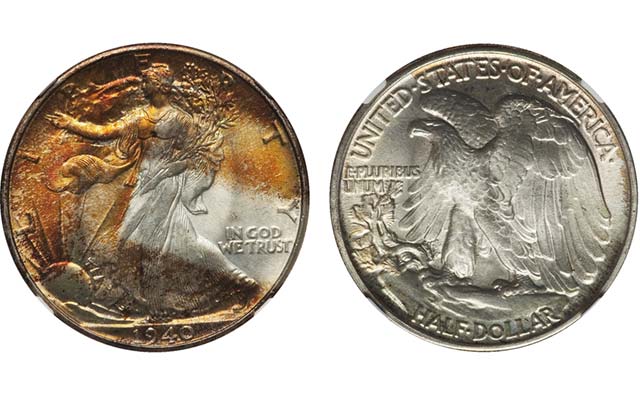 Especially for Mint State and Proof coins, eye appeal is an essential component of a coin’s grade. Grading services like Professional Coin Grading Service have informal ranges that they use to evaluate toning from amazing — for a coin that screams “Wow!” — to neutral for average coins, to ugly for unfortunately toned pieces. Great toning may elevate the grade of a coin by a grade point, just as ugly toning may take a point or two off.

Here is one handsome half dollar from Heritage’s recent Central States Numismatic Society auctions. How would you evaluate its toning?

A 1940 Walking Liberty half dollar is generally a common coin and even in higher Mint State grades it’s not particularly challenging. In MS-68 it is undeniably scarce with Numismatic Guaranty Corp. grading just 16 in this grade with a single finer example.

This NGC MS-68 example has what’s described as “unusual but attractive obverse toning, predominantly copper-orange, [that] complements a rectangle of untoned silver-white, clearly caused by something that covered that area for years when the natural toning process was occurring.” It sold for $2,585, which is relatively low in relation to other comparably graded examples that have sold at auction in recent years, including one with lighter, more even golden toning that brought $3,525 at Heritage’s June 5, 2014, Long Beach Expo