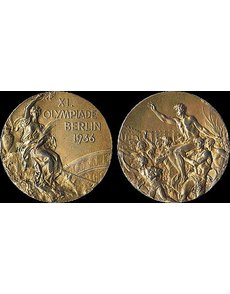 One of American track star Jesse Owens’ gold medals from the 1936 Berlin Olympics realized $1,466,574 in an online auction that closed Dec. 8.

The medal was sold by SCP Auctions Inc., in Laguna Niguel, Calif., through online auctioneer www.SCPAuctions.com. The price included a 20 percent buyer’s fee. The firm reports that 30 bids were received for the medal.

Ron Burkle, billionaire investor and co-owner of the Pittsburgh Penguins, purchased the medal, according to SCP Auctions President David Kohler. Burkle, also owner of William Faulkner’s Nobel Prize for Literature medal, has plans for an educational tour for the historic pieces.

Owens earned four gold medals at the Olympic Games, for winning the 100-meter race, the 200-meter race and the long jump, all individually, and as part of the 4x100-meter relay team.

The medal in the auction is pedigreed to the estate of entertainer Bill “Bojangles” Robinson’s late widow, Elaine Plaines-Robinson. Owens gave Bill Robinson the medal because he helped Owens find work in entertainment following Owens’ Olympic exploits, as documented in the biography Mr. Bojangles by N.R. Mitgang.

Owens’ other three medals were lost, and he was issued a replacement set, which was featured as part of the 1976 Freedom Train exhibit. Those replacements are now on exhibit at Owens’ alma mater, Ohio Sate University.

Gold medals from the 1936 Olympics are seen at auction occasionally, but cannot usually be traced to a recipient because, prior to 1960, recipients’ names were not engraved on the edge as they have been since that time. ¦