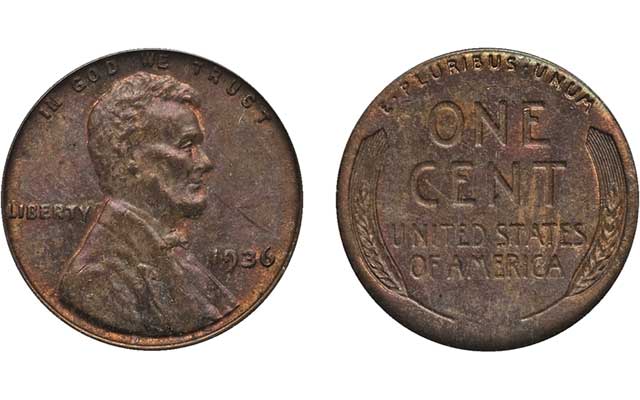 The FS-101 variety of 1936 Lincoln, Doubled Die Obverse cent is one of a small number of doubled die varieties in the series to be listed in standard references. The illustrated example appears in Heritage's Aug. 12 to 17 ANA convention auction. Images courtesy of Heritage Auctions.

Only a handful of the more than 1,000 doubled die varieties identified for the Lincoln cent series are present in standard price guides — the strongly doubled though not rare 1955 and 1972 Doubled Die Obverse cent varieties are listed in most guides as is the much rarer 1969-S Lincoln, Doubled Die Obverse cent. Some price guides also list at least one of the 1936 Lincoln, DDO cent varieties as well (more than one variety exists).

An example of a 1936 Lincoln, Doubled Die Obverse cent is offered in Heritage Auctions' Aug. 12 to 17 American Numismatic Association convention auction, to be held in the Chicago suburb of Rosemont, Ill. The coin is the FS-101 variety as listed in the Cherrypickers' Guide to Rare Die Varieties of United States Coins.

The doubling on the obverse of the coin is not as prominent as it is on the trio of 1955, 1969-S, and 1972 Doubled Die Obverse cents listed in standard references. The Heritage auction description notes of the 1936 cent, "Strongly die doubled southwest, different from the similar FS-102, which is die doubled east." While the three more prominently doubled die varieties listed show separation of some of the letters in the inscriptions, the doubling on the 1936 FS-101 variety shows no such separation. Still, the doubling is prominent enough to warrant listing in A Guide Book of United States Coins and other standard references and thus many collectors consider it a must-have for their collections of Lincoln cents.

The coin in the Heritage auction is graded Mint State 63 brown by Professional Coin Grading Service. The lot description adds: "The present FS-101 cent displays hints of mint red beneath a blanket of sea-green and ruby-red toning. A few faint marks are noted on the field above the date."

According to the Cherrypickers book, the variety is "extremely rare in Mint State."

A similarly graded piece realized $1,880 in a Heritage auction in January 2015.

Bidding on the coin will commence about July 24.