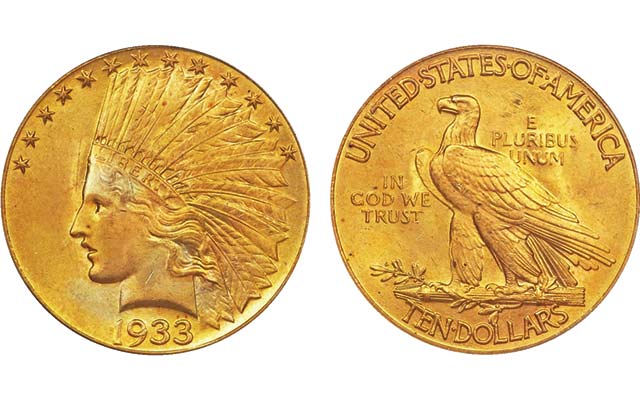 Here is the third of three coins that were among the highlights of Heritage Auctions' recent Platinum Night auction at the Central States Numismatic Society convention in Illinois.

While the Langbord family’s 1933 Saint-Gaudens $20 double eagles have been in the news recently, 1933 Indian Head gold $10 eagles are also rare and coveted. Nearly all examples from the mintage of 312,500 examples were melted, with an estimated 25 to 30 known today.

Most are in Mint State grades, as this issue did not see general circulation and most examples were obtained directly from the U.S. Mint. As Heritage notes:“The 1933 eagle is awarded the status of being the only gold issue of this date that even the most patient and well-funded collectors are currently able to obtain. Moreover, unlike the double eagle, which according to the government was never officially released in any quantity to the public, the legality of owning an example has never been questioned.”


Keep up with all of CoinWorld.com's news and insights by signing up for our free eNewsletters, liking us on Facebook, and following us on Twitter. We're also on Instagram!