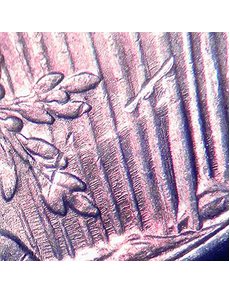 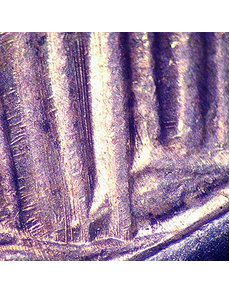 Two of the repaired rays clearly pass over the mountain instead of meeting the horizon along its upper edge. 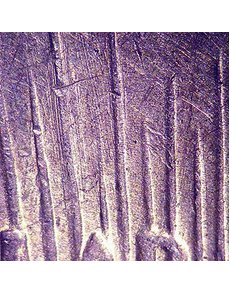 Multiple vertical polish lines are found between the rays above DOLLAR, some appearing to be shallow additional rays. 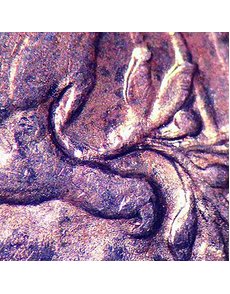 Two different reverse hub designs were used for normal Peace dollar production. The earlier design has a well-defined space between the eagle’s foot and the branch. The VAM-10 variety was from the later design with the intact branch.

When hardened steel dies meet, without the intervening planchet they are supposed to coin, the results are almost always destructive. This occurrence — clashing — tends to mar each opposing die face. The various Mints strive to produce a quality and uniform product. To this end, clash marks are often deliberately effaced.

Several different 1922-S Peace dollar varieties result from severe clashing followed by, in an attempt to reduce the offending marks, aggressive die polishing that removed portions of the actual design. Mint personnel then hand engraved the missing elements. To the delight of variety collectors, the results of their industry didn’t exactly match the original design.

The VAM-10 variety of 1922-S Peace dollar is the strongest of the three current listings of this nature for the date described in Wonders of Peace Dollars by Leroy Van Allen. As one of the more dramatic recent discoveries, it is also part of the set presented in The Elite 30 Peace Dollar VAMs by David Close and C. Ash Harrison. The variety was discovered by James Cerny in May 2006 and originally listed as VAM-2-O. The find was noted for the extensive re-engraving found to the right of the olive leaves and the heavy polishing in the field above DOLLAR. The lines in this area create the illusion of extra rays.

As with many new finds, the study of additional examples reveals additional features. In 2010, the listing was revised to VAM-10 to include the “rays over mountain” characteristic.

It is important to note which reverse hub design is present when examining potential examples, as I have seen the variety misattributed by experienced collectors. The VAM-11 has similar clashing, polishing and engraved detail, but is not quite as bold. The two varieties are more easily told apart by the 1922 hub differences listed by Van Allen and A. George Mallis in the Comprehensive Catalog and Encyclopedia of Morgan & Peace Dollars. The earlier B1 reverse design has two mountains to the right of the eagle’s perch and a clearly visible separation between the olive branch and the bird’s foot. The B2 hub design has three mountains to the right of the eagle’s haunt and a much bolder olive branch that appears to touch the bird’s foot. This later design was used for the VAM-10 variety, but not for its closest mimic.