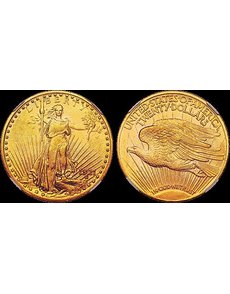 One of the extant Mint State 1921 Saint-Gaudens gold $20 double eagles sold for $117,500 in Heritage Auctions July 11 and 12 sale held in conjunction with the Florida United Numismatists Summer Convention in Orlando.

The coin is graded and encapsulated Mint State 61 by Numismatic Guaranty Corp.

The 1921 Saint-Gaudens double eagle is one of the few dates in the series where examples are more likely to be found in circulated grades than in Mint State.

Researchers estimate that less than 3 percent of the total mintage exists in circulated and Mint State grades combined from a recorded production at the Philadelphia Mint of 528,500 coins. The small number of extant examples is the result of most of the coins being melted instead of released into circulation.

The 1921 issue is one of the key dates in the Saint-Gaudens double eagle series.

The coin wasn’t struck until late in the calendar year. Mint records indicate 90,000 coins were struck in November 1921, with another 438,500 pieces struck in December. Few of the coins were released to the public through circulation channels and no other U.S. gold coins of any other denomination were struck in 1921.

According to the Heritage lot description, the 1921 double eagles “were intended to serve strictly as currency reserves. Accordingly, the great majority of the mintage remained in storage in Treasury vaults and Federal Reserve Banks until the Gold Recall of 1933, when they were melted and stored as ingots in the Fort Knox Bullion Repository,” according to the lot description.

A number of the coins managed to find their way into the hands of “well-connected collectors by Mint or Treasury officials through unofficial channels, the source for most high-grade coins we know about today,” according to the lot description.

“A few were also released into circulation, as the issue is one of the few Saint-Gaudens double eagles that is seen more often in circulated grades than Mint State,” according to the lot description.

Research conducted during the 1930s of Mint records by Charles W. Green indicates that only 21 examples of the 1921 double eagle had been released to the public through official channels.

“Today, no more than 50 to 60 are extant in Mint State grades, with a like number of surviving circulated specimens,” according to the auction lot description. “No large number of 1921 double eagles was ever found in foreign holdings.”