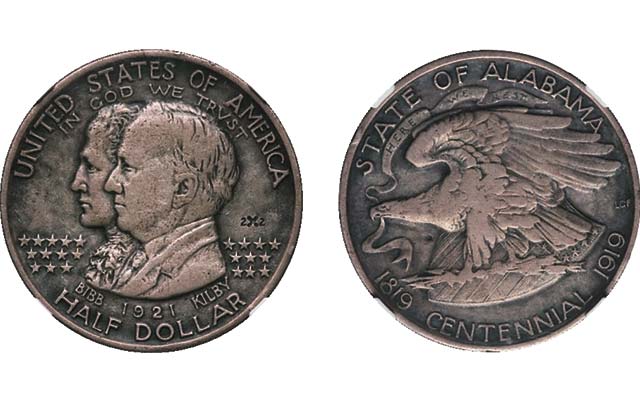 1921 Alabama Centennial commemorative half-dollars were designed by Laura Gardin Fraser and have two variants. One is the normal “plain” variety and the other one has a sunken “2X2” in the right field above the stars. This was to note Alabama’s status as the 22nd state of the Union and to create an additional version for collectors, and in turn, increased revenues.

The issue is notable for its obverse design, which includes the busts of William Wyatt Bibb, Alabama’s first governor, and T. E. Kilby, who was then-governor of Alabama. The depiction of Kilby marked the first use of a recognizable living person’s portrait on a U.S. coin.

This issue can be found in circulated condition with some frequency and this one, graded NGC Very Fine 30 sold for $90 at a Nov. 18, 2014, Heritage auction.