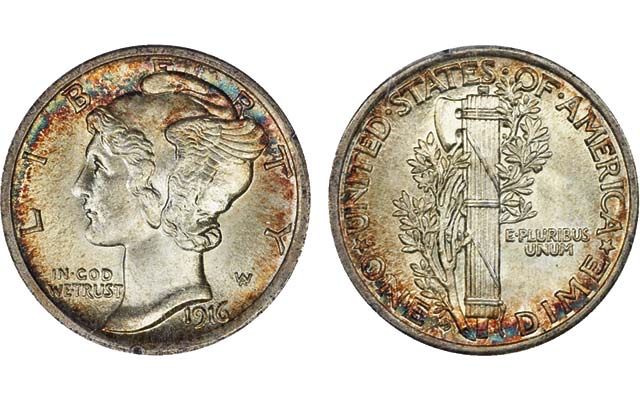 The sale totaled more than $6.5 million as of March 3.

The key date “Mercury” dime, in an older Professional Coin Grading Service first generation green label holder, sold for $94,000. The “rattler” holder (as it is called) is slightly smaller than current PCGS slabs and was used during PCGS’s first few years.

The dime is a 20th century key with a low mintage of 264,000 pieces. In 1916, the U.S. Mint transitioned away from Charles Barber’s design, which had been in use since 1892, and moved to Adolph A. Weinman’s more modern design. In 1916, the Philadelphia Mint struck dimes of both designs. The San Francisco Mint struck 5,820,000 Barber dimes in 1916 while Denver struck only the new “Mercury” dimes.

As the lot description shares, “Earlier in the year, the Philadelphia and San Francisco Mints had struck more than 22 million and 10 million examples of the new Mercury dime design respectively. These quantities were sufficient to satisfy commercial demand, and on November 24 [1916] Mint Director von Engelken ordered the Colorado branch mint to cease production of all denominations save the quarter dollar, explaining the low mintage of D-mint dimes. So the mintage and availability of the 1916-D dime was limited to the small number of coins struck prior to the Director’s orders.”

Another example grading PCGS MS-65 full bands brought $43,475 at Heritage’s PNG auction. A different example sold last year for just under $10,000 is the subject of this Coin World Market Analysis.