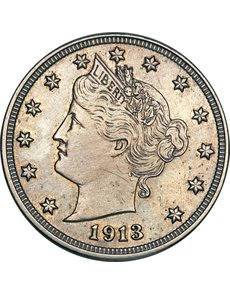 The Walton specimen of the 1913 Liberty nickel, graded PR63 by PCGS and one of only five known, will be sold at public auction for the first time at the Official Auction of the Central States Numismatic Society's Annual Convention, presented by Heritage Auctions, April 24 – 28.

George O. Walton was on his way to a coin show in 1962 when he died in a car accident. His 1913 Liberty nickel was recovered from the wreck and returned to his family. It was sent to an auction house, but returned as a fake — an error that led collectors to believe that one of the five 1913 Liberty nickels was lost and possibly gone forever.

In 2003, the other four 1913 Liberty nickels were brought together for the American Numismatic Association's World's Fair of MoneySM. A reward was offered for the 'missing' fifth nickel, $10,000 just to be the first to see it. Nobody expected two of Walton's heirs to show up with their uncle's nickel, much less for a collection of coin experts to declare it genuine.

Selected coins owned by Eric P. Newman are a collective highlight of equal importance to the Walton 1913 Liberty nickel. Items being sold are from the extensive collection of Eric P. Newman Numismatic Education Society (a Missouri not-for-profit corporation) and have been assembled over a period of 90 years. Proceeds of the sale of all items will be used exclusively for the benefit of other not-for-profit institutions selected by the Eric P. Newman Numismatic Education Society for public purposes and also for supplementing the Society's own museum operations and scholarly research efforts.

A single Territorial gold coin from The Eric P. Newman Collection caused a stir as soon as it was certified. An 1852 Humbert ten dollar coin was graded MS68 NGC, CAC, the first California private or Territorial gold coin to be certified as MS68 by a major service. The coin was retained by Augustus Humbert, United States Assayer of Gold for California in the early 1850s, and passed directly into his estate.

Early American coinage is well-represented in the event, and the most fascinating piece is perhaps the 1783 Nova Constellatio Type Two "Quint" in Silver, AU53 PCGS. The 13 former colonies each used a different monetary system at the time, and the Nova Constellatio patterns were based on a complicated system that would accommodate 12 of them. This 500-unit pattern, or "quint," is unique and most recently appeared at auction in November 1979.

The Norweb specimen of the 1792 silver center cent, MS61+ Brown NGC, is one of the first experimental coins made under the authority of the Mint Act of 1792. Its unusual appearance, with a small silver "plug" in the middle of a wider copper body, was an attempt to reduce the weight of the cent by adding a small amount of precious metal. Graded MS61+ Brown, this coin is slightly finer than the Morris specimen, sold by Heritage for $1.15 million in April 2012.