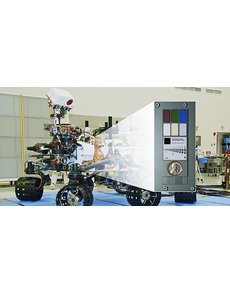 The Mars rover Curiosity, now en route to the Red Planet, carries onboard a calibration target that includes a 1909 Lincoln, V.D.B. cent. The enlarged image of the target shows details of the package; the position of the target on the rover is also indicated. 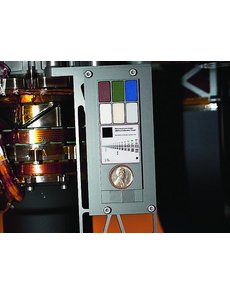 The calibration target on Curiosity includes aids for interpreting color and brightness in images; a marked scale of black bars in a range of labeled sizes for calibration; and a 1909 Lincoln, V.D.B. cent. The cent, as a common and everyday object, provides a calibration target for the rover’s hand lens. 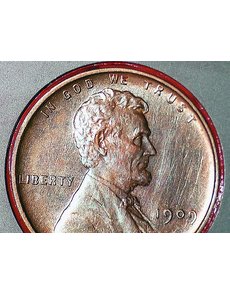 The 1909 Lincoln, V.D.B. cent en route to Mars, nicknamed the “Red Planet,” is a little less red than it was when it was purchased for the mission, probably as a result of testing and environmental factors before the mission. Coin collectors will be able to monitor changes to the coin’s condition via the Internet. 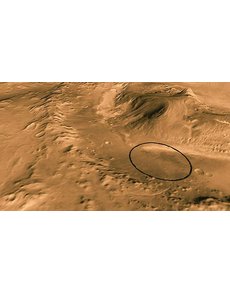 Curiosity is scheduled to land at Gale Crater on the planet Mars in August. The black circle marks the target for the martian surface mission.

The Red Planet in August will receive its first red cent — a 1909 Lincoln, V.D.B. cent carried aboard NASA’s Mars rover Curiosity as part of a scientific calibration target used for testing the rover’s high-tech hand lens.

When Curiosity was launched onto its nine-month-long journey to the planet Mars on Nov. 26, the rover carried as one of its many scientific packages a calibration target. The cent is mounted near the bottom of the target, with its obverse facing outward.

The target, the size of a smart phone, will be used to test the performance of the rover’s Mars Hand Lens Imager.

“When a geologist takes pictures of rock outcrops she is studying, she wants an object of known scale in the photographs,” said MAHLI principal investigator Kenneth Edgett, of Malin Space Science Systems, San Diego. “If it is a whole cliff face, she’ll ask a person to stand in the shot. If it is a view from a meter or so away, she might use a rock hammer. If it is a close-up, as the MAHLI can take, she might pull something small out of her pocket. Like a penny.”

Edgett told Coin World Feb. 7 that he considers himself an “amateur” collector.

“Mostly, I enjoy saving the first [Philadelphia Mint and Denver Mint] cent, nickel, etc., I find as the new ones come out. Certainly I have always been most jazzed about the U.S. cents, going back to childhood,” he said.

The coin is in circulated condition, though its exact grade is not recorded, although Edgett now admits “I wish I had documented this.”

He adds: “I believe it had been considered ‘circulated’ but it is in pretty good condition. It was much redder when I bought it. I think the various environments it was subjected to after the calibration target was assembled caused it to turn brown.

NASA indicates that the use of an universal, utilitarian object like a Lincoln cent serves an additional function: public engagement. Collectors and numismatic conservators may be especially interested in monitoring future changes to the coin.

According to NASA, the middle of the target offers a marked scale of black bars in a range of labeled sizes. While the scale will not appear in photos MAHLI takes of Martian rocks, knowing the distance from the camera to a rock target will allow scientists to correlate calibration images to each investigation image.

Another part of MAHLI’s calibration target displays six patches of pigmented silicone as aids for interpreting color and brightness in images. Five of them — red, green, blue, 40-percent gray and 60-percent gray — are spares from targets on NASA Mars rovers Spirit and Opportunity. The sixth, with a fluorescent pigment that glows red when exposed to ultraviolet light, allows checking of an ultraviolet light source on MAHLI. The fluorescent material was donated to the MAHLI team by Spectra Systems Inc., Providence, R.I.

A stair-stepped area at the bottom of the target, plus the cent, help with three-dimensional calibration using known surface shapes, according to NASA.

“The importance of calibration is to allow data acquired on Mars to be compared reliably to data acquired on Earth,” said Mars Science Laboratory Project Scientist John Grotzinger, of the California Institute of Technology, Pasadena.

The calibration target also features a miniscule cartoon of a character named “Joe the Martian.”

“The Joe the Martian character appeared regularly in a children’s science periodical, ‘Red Planet Connection,’ when Edgett directed the Mars outreach program at Arizona State University, Tempe, in the 1990s,” according to NASA. “Joe was created earlier, as part of Edgett’s schoolwork when he was 9 years old and NASA’s Mars Viking missions, launched in 1975, were inspiring him to dream of becoming a Mars researcher.”

The 1909-S Lincoln, V.D.B. cent carried aboard Curiosity has some numismatic company on another NASA spacecraft: the New Horizons spacecraft, currently en route to Pluto and the Kuiper Belt. It carries two State quarter dollars, one for Florida, to represent the state where New Horizons was launched, and one for Maryland, representing the state where the spacecraft was built.

New Horizons, which has passed beyond the orbit of Uranus, is scheduled to arrive at the dwarf planet Pluto in 2015.

As with the cent onboard Curiosity, the two quarter dollars on New Horizons serve a utilitarian purpose; they are being used as a spin-balance weight on the 10-year mission.

Spacecraft from Earth have visited the eight major planets in the solar system, but have not yet visited any of the four trans-Neptune dwarf planets. The New Horizons mission will be the first.

The New Horizons mission to Pluto will take nearly 10 years to execute because of the vast distance from Earth to the dwarf planet. The spacecraft will journey more than 3 billion miles before arriving at Pluto for its five-month-long reconnaissance flyby study of Pluto and its three moons (Charon, the largest, and Nix and Hydra), according a NASA fact sheet.

New Horizons will make its closest approach to Pluto on July 14, 2015, according to NASA.

The Kuiper Belt is a region of the outer solar system, extending from the orbit of Neptune to approximately 55 astronomical units from the sun. ¦