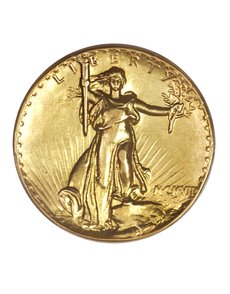 An extremely rare example of the prized 1907 Ultra High Relief double eagle sold for $1,057,500 to lead the results of Heritage Auctions’ US Coins Signature Auction, held in Philadelphia August 2-5. More than $21 million in rare coins sold in August 3rd’s Platinum Night. Overall, this auction brought its happy consignors over $27.5 million, with an additional $1 million in sales from Heritage’s currency auction held on August 3. All prices included 17.5% Buyer’s Premium.

The Ultra High Relief double eagle in this auction is distinctive because of its 1906 Style edge lettering, in a Sans Serif Font with stars between each of the letters of E PLURIBUS UNUM. This lettering style dates this coin as one of the first three Ultra High Reliefs struck. This piece was the first coin discovered with this lettering style, in 1992, and today just two such coins are known. The coin shows evidence of handling, as implied by its Proof-58 grade. If it was used as a pocket piece by some early recipient, we can only wonder who that person was!

Almost as rare, with only four examples known, is the 1802 Novodel proof dollar that realized $851,875. The term “novodel” describes a coin struck long after the date it bears, but which is not a restrike. The dies for this coin were most likely prepared in the 1870s, when the coin is believed to have been struck. Two separate condition censuses consider this the finest known of the four examples by the tiniest of margins.

The 1921 Saint-Gaudens double eagle is an absolute rarity that sells for mid- to high-five figure prices in any grade. It is also the premier condition rarity in the series, with only four examples known that grade MS65 or higher. One such Gem sold for $587,500 in this auction, demonstrating the extreme interest these large gold coins hold for collectors.