1903-O Barber quarter in Gardner sale once belonged to Eliasberg 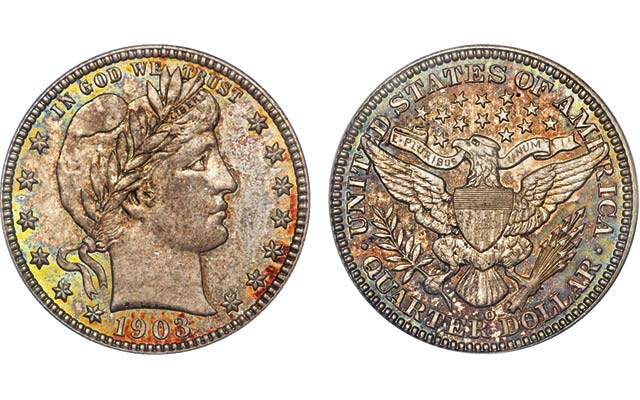 A 1903-O Barber quarter dollar formerly in the collection of Louis E. Eliasberg Sr. and considered the finest known sold for $32,900 at Heritage’s May 12 Gene Gardner auction by Heritage.

The Story
Several of Gardner’s quarter dollars were once in the collection of Louis E. Eliasberg Sr. and were previously offered in Bowers and Merena’s April 1997 auction of part of Eliasberg’s impressive collection.

This 1903-O Barber quarter dollar graded Mint State 67 by Professional Coin Grading Service with a green Certified Acceptance Corp. sticker was purchased by John M. Clapp directly from the New Orleans Mint in October 1903. From there it went to Eliasberg, sold at Bowers and Merena’s 1997 auction, and then again sold at a 2005 Heritage auction for $24,150.

It is the sole finest example at PCGS with Numismatic Guaranty Corp. grading a single example in MS-66 with none finer. It is considered one of the rarest issues in the series in gem and finer grades. This example has handsome toning, described in the catalog as “intermingled tones of light gold, orange, sea-green, and dove-gray.” At the Gardner III auction it sold for $32,900.