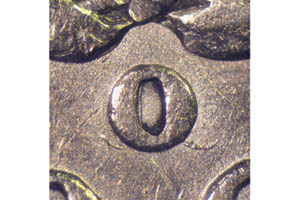 Faint traces of the original Carson City Mint’s CC Mint mark are visible on either side of the overpunched 0 for the New Orleans Mint. 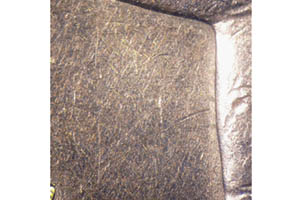 What’s not there is significant. No trace of a clash is present on the obverse of this 1900-O/CC VAM-10. 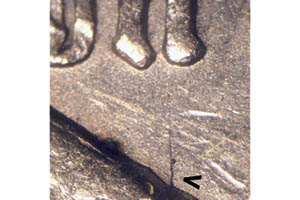 In its earlier use in the VAM-7 marriage, this O/CC die clashed once. Traces are still apparent in its later usage. 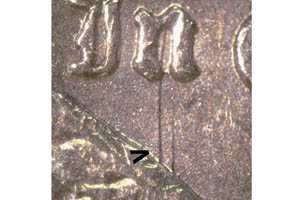 Another clash occurred, forming the VAM-10A, as evident by the stronger clash mark that reaches the interior of the letter N.
Previous
Next

In U.S. Mint history, one of the best known examples of recycling occurred when the Carson City Mint was officially closed. When its holdings were inventoried, several reverse dies were found and refurbished for use at the Branch Mint in New Orleans.

The Comprehensive Catalog and Encyclopedia of Morgan & Peace Dollars by Leroy Van Allen and A. George Mallis details the use of five reverses of over Mint marks paired with six distinct obverse dies, forming six marriages. Additionally, four major stages are known. With a group of collectors pursuing all of the reported variations of these 1900-O/CC Morgan dollars, a gap in the progression became apparent.

VAM-7, -7A, -10 and -10A all share the same reverse, with the VAM-7 coin as its earliest stage. The dies clashed during the VAM-7 pairing, leaving single clash marks on both obverse and reverse. The obverse began to break and chip along the top of the date in the stage called VAM-7A.

The obverse die was then swapped out forming the VAM-10, first reported by Martin Field in September 1979. A strong die clash with a portion of the letter N from the motto IN GOD WE TRUST transferred to the obverse field was reported by Ash Harrison in June 2003. This stage is listed as VAM-10A. It has a single clash on the obverse and doubled clashes on the reverse.

In the years since Harrison’s discovery, all examples of the VAM-10 marriage have been noted with the obverse clash, although a portion are a later stage with the letter transfer worn away.

There should be a stage, from right after the die swap, with no obverse clash.

In January, collector Brad Bellomo showed a number of fellow numismatists an example that appears to be the missing stage.

Specialists do not universally agree that his piece is the early die stage of the VAM-10 dollar, but I had the chance to examine, photograph and certify the coin.

I must wholeheartedly agree with Bellomo’s opinion, “I think it’s a significant find.”