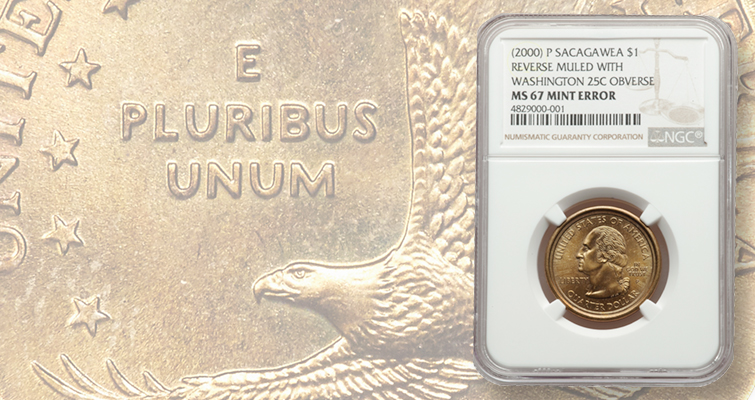 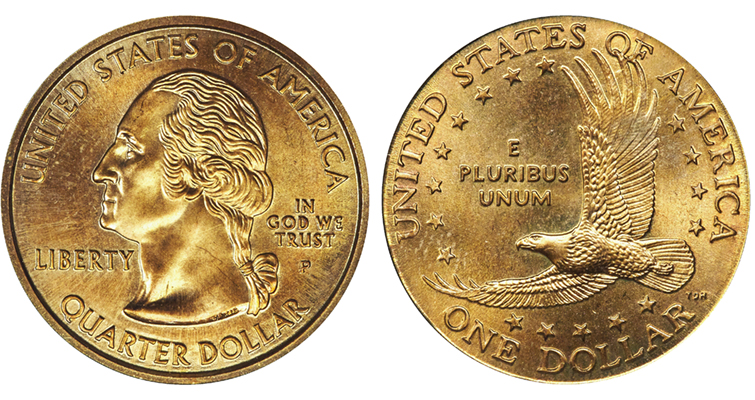 The number of publicly known examples of $1.25 mule error coins featuring a George Washington obverse and Sacagawea dollar reverse has risen to 18 since the first example was reported in 2000.

The most recent example reported will be offered Jan. 10 in Orlando, Florida, by Heritage Auctions during the firm’s Platinum Night sessions held in conjunction with the Florida United Numismatists convention.

A mule error is struck from a pairing of two dies not intended to be used together. In the case of the $1.25 mule, a die featuring the George Washington obverse intended for a State quarter dollar was paired with a Sacagawea dollar Soaring Eagle reverse die and struck on a manganese-brass clad dollar coin planchet by a press dedicated to dollar coin production.

The errors bear no date but were produced in calendar year 2000. The date that year would have appeared on the intended dollar’s obverse, which features sculptor Glenna Goodacre’s portrait of Sacagawea carrying her son, Jean-Baptiste, on her back.

Reportedly, a local collector who found the error in circulation nearly two decades ago brought the coin to the bourse table of error coin dealer Fred Weinberg, who has sold or brokered the sale of a number of the known pieces.

The 18th example is graded and encapsulated as Mint State 67 by Numismatic Guaranty Corp. and is from Die Pair 1.

When the bidding starts Jan. 10 on this most recently reported example, Farmington, New Mexico, collector Tommy Bolack expects to be on the telephone placing his bids.

Of the 17 previously known examples, Bolack has purchased, either by private treaty or at public auction, all but three of the errors. Bolack said if the three privately held pieces were offered, he’d buy them.

For eight of the examples he owns, those for which the purchase price is publicly known, Bolack has already spent more than $750,000.

The only examples Bolack doesn’t own include a PCGS MS-65 Die Pair 1 coin sold by Weinberg to error dealer Arnold Margolis and resold by Margolis to a collector in September 2000 for $47,500.

Bolack also doesn’t own The Greg Senske specimen, an NGC MS-67 Die Pair 3 coin that Senske discovered in September 2000 in change from a cashier at a company cafeteria in Cape Girardeau, Missouri. The coin had been in a 25-coin roll of dollars wrapped in a U.S. Mint designated paper wrapper.

Bolack also doesn’t own the Nicholas Brown specimen, which was sold privately for an undisclosed sum in July 2011. The coin is certified NGC MS-67 Die Pair 1.

The discovery mule error coin was found in Mountain Home, Arkansas, by Frank Wallis. Originally sold by Bowers & Merena Auction Galleries at the 2000 ANA Philadelphia Millennium Sale for $29,900, the piece was purchased from Dwight Manley by Weinberg in late June 2001 and then sold to Tommy Bolack for $67,000.

Most of that production was recovered, except for the now 18 examples known and any other pieces that may yet surface.

Weinberg has a complete list of the 17 examples that have previously sold posted on his website www.fredweinberg.com under the Error News drop-down tab.

During its examination and grading of mule error submissions, NGC graders were able to attribute three different die pairs for the mule production.

The following are the diagnostics to look for:

Novelty replica versions of the coins also exist and occasionally surface in collections and in circulation. 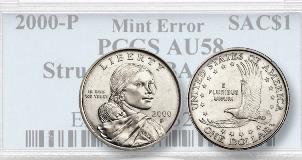 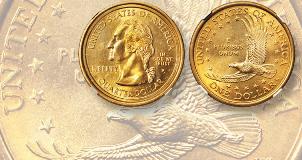 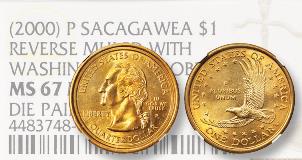