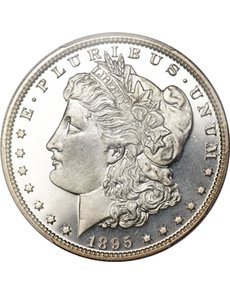 Complete specimen set of eight denominations prepared for the Bank of Canada sold for $16,000 Jan. 13 at auction by Stack’s Bowers Galleries during NYINC. Notice the sinister-looking face in the close-up image.

A proof-only 1895 Philadelphia Morgan dollar, PR66 Cameo PCGS, leads the thousands of lots up for bid at Heritage Auctions’ November 2012 U.S. Coins Signature® Auction, the official auction of the Money Show of the Southwest, with floor sessions scheduled for Nov. 29-30 in Houston and live bidding sessions December 1-2 at HA.com/Coins.

The 1895 Morgan dollar is one of the all-time famous rarities. Morgan dollar enthusiasts dream of owning any specimen from the issue of just 880 proofs, so this offering of this high-end example — a gorgeous PR66 Cameo survivor — will thrill the winning bidder.

Another high-end silver coin is an 1896-S Barber quarter, MS66 NGC, considered among the half-dozen finest available. The 1896-S is the first of three San Francisco Barber quarters that form the key dates of the series. While it has the highest mintage of the three and generally is considered to be the most common in lower grades, in better-than-Gem condition, it rivals the more famous 1901-S quarter in rarity.

Important 19th and 20th century gold includes a 1911-D quarter eagle, MS65 NGC, once again an important key-date coin in high grade; a scarce and unusual 1834 Classic Head half eagle with Crosslet 4 in Date, MS62 PCGS, and a 1929 double eagle, MS64 PCGS, a heavily melted later Saint-Gaudens issue struck in the year of the infamous stock market crash that popularly marks the start of the Great Depression.

Private and semi-private coins, tokens and medals are an uncommon and welcome strength of this auction. A silver 1783 Chalmers Shilling with Long Worm reverse, AU58 PCGS is a well-preserved example of the private coinage created by Annapolis silversmith Captain John Chalmers for local circulation. Also notable are a wide selection of the Hard Times Tokens created by Dr. Lewis Feuchtwanger, tireless self-promoter of his pet alloy of copper, nickel, and zinc. A representative leading light is a rare 1837 three-cent Feuchtwanger token with Eagle Reverse, MS63 PCGSM.

Of similar rarity is an 1874 restrike in copper of the 1861 Confederate cent, PR65 Red and Brown PCGS, one of 55 such pieces struck by John W. Haseltine from the dies clandestinely created by Philadelphia diesinker Robert Lovett, Jr.

Of a far more official character is a 1925 Norse Gold Medal, PR66 PCGS, CAC, a medal congressionally authorized in lieu of a commemorative coin and struck from dies created by Buffalo nickel designer James E. Fraser. Just 47 of the gold medals were sold, compared to far higher tallies for the silver and bronze versions.

Bid on this auction now at www.HA.com/coins.