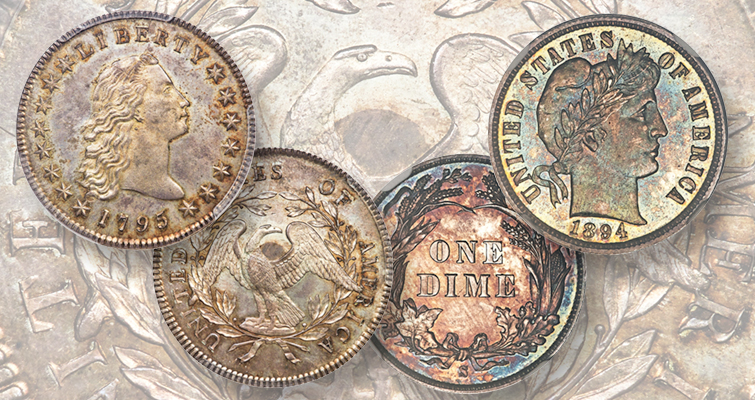 First among the several major collections coming to auction in September was Heritage’s Sept. 17 sale of 349 coins from the Bob R. Simpson Collection, Part I. Leading bidding was a Professional Coin Grading Service certified Proof 66 1894-S Barber dime — one of nine-known survivors — that brought $1,500,000. Overall the session approached $15 million in prices realized.

The sale of the dime will serve as a useful comparable when Stack’s Bowers Galleries offers another example of the famed rarity at its upcoming Larry H. Miller auctions, this one graded Proof 65 by Numismatic Guaranty Corp. and bearing a green Certified Acceptance Corp. sticker.

Another exciting coin in the Heritage auction was a 1795 Flowing Hair dollar, listed and illustrated as B-7 and BB-18 in the Bowers-Borckardt early dollar reference, graded Mint State 65+ by PCGS and having a green CAC sticker. The historical coin is the type of piece that fascinates collectors, blending interesting technical elements with a rich provenance. It was likely purchased by William Strickland directly from the Philadelphia Mint in 1795 and spent four generations with the Baron St. Oswald of Nostell family from 1874 to 1957. It is called the Lord St. Oswald Specimen and is the finest-known 1795 Flowing Hair dollar with a silver plug, and the second-finest of the date overall.

In the mid-20th century some researchers, including Walter Breen, suggested that it was a special presentation striking, and some early descriptions omit the presence of the plug. As Heritage points out, “That was not unusual for catalogers at that time to avoid the subject, thinking bidders would perceive the Mint anomaly as damage.”

A silver plug was added to the planchet before the coin was struck to bring it up to proper weight, while planchet adjustment marks are also seen. The plug is more clearly seen on the reverse, where it is darker in color.

The coin brought $705,000 when it was offered at Part II of Stack’s Bowers’ and Sotheby’s D. Brent Pogue auction, where the cataloger called it “a coin of great native beauty, like a tropical island or a mountain glen, natural and unsophisticated, showing no evidence of trespass from humans for centuries.” At Heritage’s Sept. 17 sale it realized a bit less, selling for $630,000.

Another returning rarity was the sole-finest 1796 Draped Bust, Small Eagle dime, JR-1, graded PCGS Specimen 67 and having a CAC sticker, that sold for $750,000 on Sept. 17, less than the $881,250 it sold for at Heritage’s June 2014 Gene Gardner auction. Considering the onslaught of great U.S. coins coming to auction in the next few months, the strong prices for the Simpson coins provide a solid indicator that the upcoming auction season should be healthy. 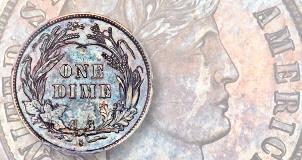 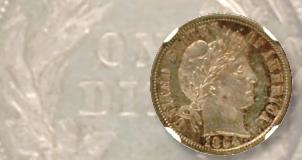 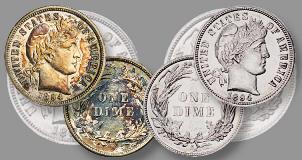