1894 Morgan dollar a coin with high number of impersonators 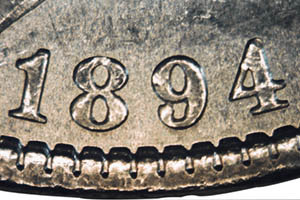 Since all 1894 Morgan dollars were struck at the Philadelphia Mint with the same pair of dies, diagnostics for all genuine pieces are the same. The 1 in the date should be positioned directly over the space between denticles along the rim. The right edge of the base of the 4 should line up with another space between two denticles. 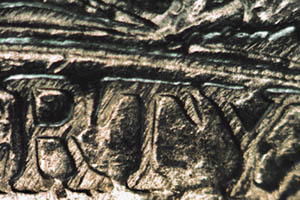 Two strong die lines appear angling down from right to left in the right foot of the R in LIBERTY. Another die line angles down in the base of the T.

The circulation-strike 1894 Morgan silver dollar struck at the Philadelphia Mint has an extremely low mintage of 110,000 pieces. Such a small number of pieces, combined with the popularity of the Morgan dollar series, results in significant premiums for this issue.

With this type of financial inducement, thousands of circulated 1894-O and 1894-S Morgan dollars have had their Mint marks removed over the years.

Some of these alterations are quite skillfully done, and are deceptive enough to fool many collectors and dealers.

Fortunately, the entire mintage of circulation-strike 1894 dollars was produced from a single die pair, and a number of diagnostics can be used to identify the genuine pieces.

Using a quality magnifier in the 7- to 10-power range, first inspect the date area of the coin. The 1 in the date should be positioned directly over the space between two of the dentils.

The right edge of the base of the 4 in the date should line up with another space between two dentils (the dentils are the squares that form the rim of the coin).

If the coin you are inspecting does not match these positions, it cannot be a genuine business strike 1894 dollar.

Next, take a look at the letters in LIBERTY, holding the coin at an angle under good lighting. A series of raised die lines angle down from right to left inside the letters. In particular, two strong lines appear in the right foot of the “R” and another line in the base of the “T” in LIBERTY. Refer to the image shown here for the exact location of these die lines.

Since these die lines are located inside the incuse letters of LIBERTY, they are protected from wear all the way down to Good condition, making these diagnostics an excellent tool against counterfeiters and alteration experts.