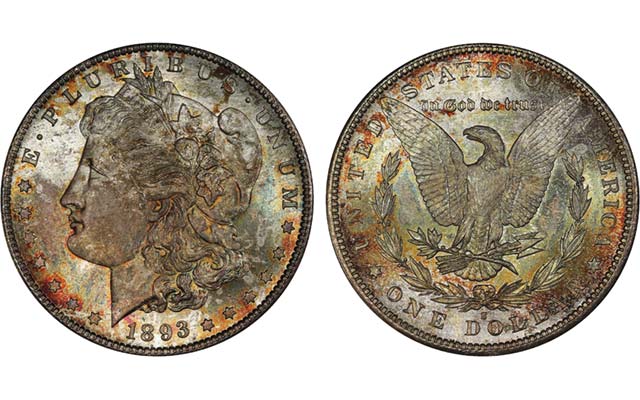 The finest known 1893-S Morgan dollar is a highlight from the Coronet Collection.

You could be the new owner of the finest known key-date 1893-S Morgan dollar — for $2 million.

Legend Rare Coin Auctions is offering the coin by private treaty from the Coronet Collection, separate from several upcoming public auctions of the collection.

The coin is graded Mint State 67 by Professional Coin Grading Service and bears a green sticker from Certified Acceptance Corp.

This example of the 1893-S Morgan dollar is often presented as the Vermuele/Jack Lee specimen, pedigreed to having been owned previously at separate times by collectors Cornelius Vermuele III and Jack Lee. Lee assembled three different Morgan dollar collections, sometimes selling and buying back some of the same coins for subsequent collections.

The Vermuele/Jack Lee II 1893-S Morgan dollar has been in the Coronet Collection since Laura Sperber from Legend Numismatics placed it there in 2008 following a private transaction reported at being in excess of $1 million.

The Coronet Collection has been assembled by an anonymous collector who has been buying high-grade Morgan dollars since the 1970s.

Sperber purchased the coin from numismatist Chris Napolitano, then with Summit Rare Coins, who brokered the Oct. 14, 2008, private from its then owner.

The Coronet Collection of Morgan Dollars is listed in the PCGS Set Registry as the No. 1 set under the Basic Circulated category.

The cataloger speculates that because of the coin’s pristine condition that the elder Vermuele likely acquired the coin from the San Francisco Mint soon after the coin’s  production.

The cataloger further speculated that because of the coin’s condition, that it could have been from the output reserved for the U.S. Mint’s Assay Commission from 1893.

The 1893-S Morgan dollar was again offered at auction by Stack’s in the firm’s March 8, 2005, sale of the Richard C. Jewell Collection, but the coin did not sell.