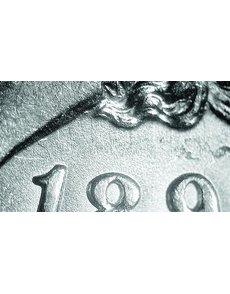 Partial outlines of several letters from the motto in god we trust are found above the date on well struck examples. 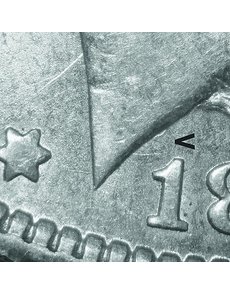 The VAM-14A 1891-O Morgan dollar is the only known variety in the series with the top portion of the letter g from god clashed into the field under Liberty’s portrait. 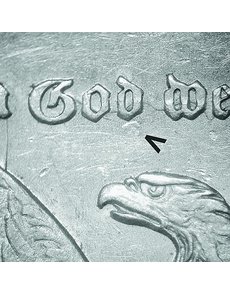 The reverse displays matching misaligned clash marks. The outline of the bottom edge of Liberty’s portrait passes through the letters of the motto. An impression from the designer’s initial m is found under the d of god.

Strongly misaligned clashing that defies a simple explanation is the defining characteristic of one of the most intriguing Morgan dollar varieties that advanced collectors may encounter.

In January 2004, Mark Kimpton discovered a dollar with clashmarks far from their typical locations. Leroy Van Allen subsequently included it in New VAM Varieties of Morgan & Peace Dollars as VAM-14A.

The description of the coin being from clashed dies belies the complex nature of how this variety may have come to exist.

A clash occurs when a planchet fails to feed into the press and the dies strike each other, literally coining a portion of the design into the opposing die face.

Typically, a clash mark is closely aligned to the location of the corresponding feature of a ‘normal’ coin. When a misaligned clash occurs, the hammer die is offset from its desired stroke. For this particular dollar, this displacement is a full 2 millimeters to the south.

During normal press operation, the lower die would be retracted within the collar to form the coining chamber. It would then move to its “up” position to eject the newly struck piece. If the lower die was in its proper position during the clashing strike, the upper die would have hit the collar plate instead.

The cause of three simultaneous malfunctions — failure to feed, misalignment of the upper die, and improper cycling or jamming of the lower die — remains a mystery.

Naturally, the clash marks on examples of the VAM-14A dollar are unusual. No other Morgan dollar has letter transfer quite like it. The top of the g from god protrudes from the underside of the truncation of Liberty’s bust.

The additional clashed letters mentioned earlier are also present, but these faded from the obverse die quickly and most examples only have faint traces of them.

The reverse is also strongly clashed with the image of the designer’s initial m located under the letter d of god.

Few examples of the variety are known and even fewer have traded. Values are speculative at best until the variety becomes better known.