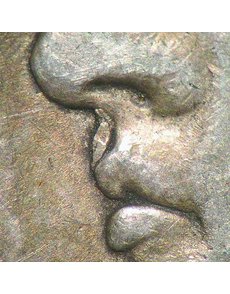 A strong die break on Liberty’s upper lip lends itself to an obvious nickname — the “moustache.” 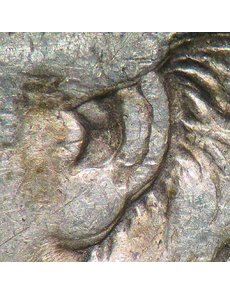 All stages of this obverse show strong die doubling on the ear, as illustrated here. 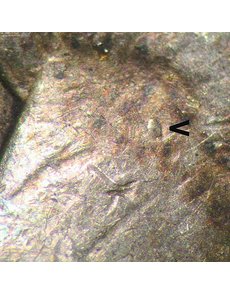 A good secondary die marker is the chip on the back of the forehead just below the hairline, shown by arrow. 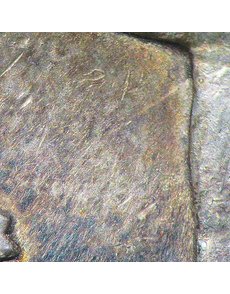 The progressive cracking and breaking that forms the “moustache” began after a strong die clash. All examples will show this mark from the top of the eagle’s wing.

The rare yet extremely popular “Moustache” variety of 1891 Morgan dollar is occasionally encountered with dogged persistence in searching.

First reported by Steve Sabella in April 1980, the VAM-2A 1891 Morgan dollar is listed in the Comprehensive Catalog and Encyclopedia of Morgan & Peace Dollars by Leroy Van Allen and A. George Mallis. It is a highlight of The Top 100 Morgan Dollar Varieties: The VAM Keys by Michael Fey and Jeff Oxman.

All stages of the marriage feature a strongly doubled obverse die, most readily noted on Liberty’s ear and the hair directly above it.

This specific obverse may be further identified by a prominent die chip that bears a resemblance to a beauty mark on Liberty’s forehead. In its earlier stages, the variety is identified as VAM-2. While the VAM-2 stage is also a Top 100 listing, it is fairly common.

Midway through their life, the dies clashed strongly, leaving some coins displaying a partial incuse n from the reverse motto in god we trust in front of Liberty’s neck. Clashing tends to weaken dies, and is almost certainly a significant factor in this obverse’s later deterioration.

The progressive breaking that forms the “moustache” begins with a faint crack under the nostril. This die crack was quickly followed by a short and narrow vertical break in the same location. These precursors to the VAM-2A are only worth a modest premium over a VAM-2.

As is typical for varieties involving die breaks, the more advanced the break, the more valuable it becomes.

When a well-defined chunk broke out of the die in front of the lip, the aptly nicknamed “moustache” was formed. This feature is clearly visible to the trained eye and is rarely encountered unattributed. Sales are infrequent at best and condition census examples are usually offered at auction.

A scant 17 examples are reported in the Society of Silver Dollar Collectors registry with an About Uncirculated 58 piece considered the finest known.