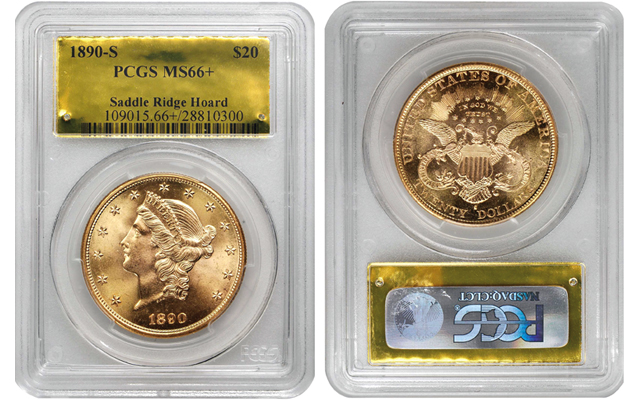 An MS-66+ 1890-S Coronet $20 double eagle from the Saddle Ridge Hoard is the finest known example of the issue. Nearly 100 of these were discovered in the famed hoard. Images courtesy of Stack's Bowers Galleries.

Stack’s Bowers Galleries is gearing up for its May 20 Rarities Auction on New York City. The sale follows the firm's May 19 auction with Sotheby’s featuring 128 coins from the D. Brent Pogue Collection.

The 2013 discovery of the Saddle Ridge Hoard in the Sierra Navada Mountains east of San Francisco was a mainstream news sensation. The 1,427 coins that were found in six cans totaled $27,980 in face value and the sale of the coins began in May 2014. A year later, these coins enjoy a robust market.

The catalog entry puts the rarity of this issue in perspective, writing, “Like many late 19th century double eagles struck at San Francisco, some coins dated 1890-S saw use in circulation while many others were shipped abroad where they remained until they were repatriated beginning after World War II. While not a rarity in circulated grades and the lowest Mint State levels of preservation, the 1890-S is challenging to locate above MS-63.”