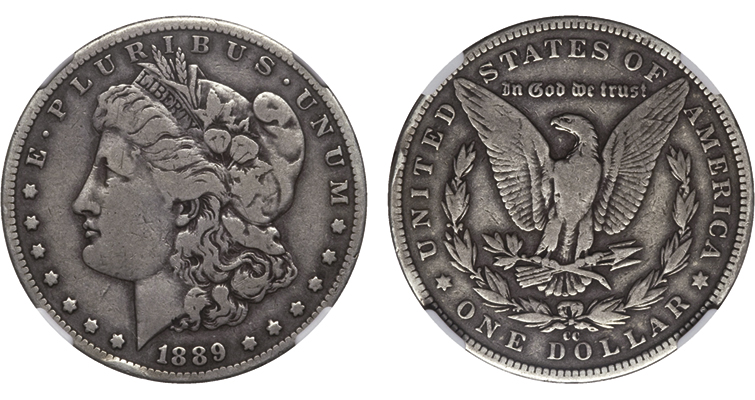 A Very Good 10 1889-CC Morgan dollar graded by NGC sold for a reasonable $517 at Heritage’s online session held right after the ANA convention.

The 1889-CC Morgan dollar is a key to the series with a relatively low mintage of just 350,000 pieces (many of which found their final home in the melting pot).

The Carson City Mint had stopped striking silver dollars in 1885, and dollar production in 1889 did not resume until October. As Rusty Goe writes in his book The Mint on Carson Street, “Carson City Mint employees were eager to get back to work in July of 1889. Four years of dormancy had left the facility in a state of disrepair, but clean-up crews removed the cobwebs, aired out the rooms, and dusted off the machinery in preparation for a resurrection of coinage operations.”

This Very Good 10 example, graded by Numismatic Guaranty Corp., sold for $517 at Heritage’s online ANA auction held immediately after the close of the convention. The price was a bit more than the $500 that a comparable Very Good 8 representative may bring, but much less than the $750 that a nice Fine 12 example would merit.