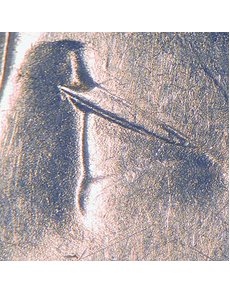 The upper eyelid is doubled along its entire underside on the VAM-22B variety of 1887-O Morgan dollar. 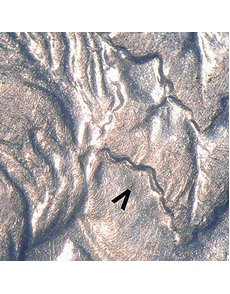 A number of features are doubled on this obverse, including the lower left edges of the lower cotton leaves. 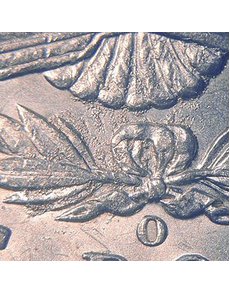 Fairly early in the reverse’s lifespan, pitting forms on the tail feathers and wreath. 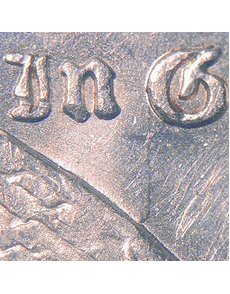 The late die stage, VAM-22B dollar is weakly clashed. The impression from Liberty’s neck barely grazes the G of GOD.

Jeff Oxman, co-author of The Top 100 Morgan Dollar Varieties: The VAM Keys, first reported one of the more interesting marriages and progressions found in the series.

In 1984, Oxman discovered an 1887-O Morgan dollar with a strong doubled die obverse mated with a strongly pitted reverse.

The find was followed by the uncovering of earlier and later stages.

The entire progression is detailed in New Varieties of Morgan Dollars by Leroy Van Allen.

Oxman’s initial discovery, today known as VAM-22A, displays a clear shift in multiple areas of the obverse. The doubling is most noticeable on the eyelid and lower cotton leaves.

The reverse has a bold patch of pitting from the tail feathers to the lower left bough of the wreath.

In 1997, Oxman found an earlier stage without any trace of the pitting — now listed as VAM-22.

With a dedicated core of specialists pursuing examples, it was inevitable that more information would eventually be uncovered.

In 2003, Mike Emswiler noted a later stage with clashing and weak letter transfer. After subsequent revision, the VAM-22B 1887-O Morgan dollar is described as having the pitted reverse along with a faint sliver of the back curve of the G from GOD protruding from Liberty’s neck.

A small nub of an impression from the base of the second T of TRUST also appears under the lower portion of Liberty’s lower hair.

What appears to be the most difficult stage to locate was uncovered by Larry Eakins in 2010. This particular stage is an early stage of VAM-22A 1887-O Morgan dollar with only a light band of pitting.

While this earlier version of the pitted reverse and the unpitted VAM-22 aren’t considered part of the Top 100 varieties set, both stages are still highly collectable and more rare than their later counterparts.