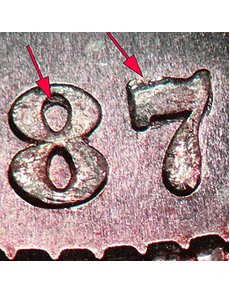 A strong shift between punchings is visible along the underside of the top of the 7 and the inside of the upper loop of the second 8 in 1887, shown by arrows. 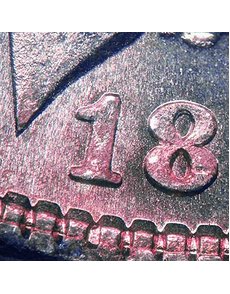 The first two digits are also repunched, but the shift is very minor. 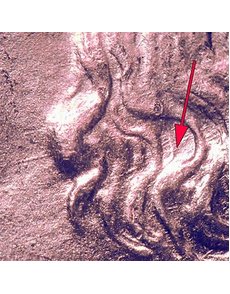 The pattern of die scratches within the D-shaped gap in Liberty’s hair, shown by arrows, may serve to confirm the attribution of late die stage or worn examples. 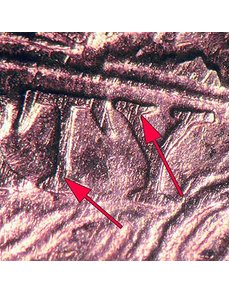 Further confirmation can be found in the letters of LIBERTY, again by observing the pattern of die scratches, shown by arrows.

It is only natural that some of the most dramatic Morgan dollar varieties were discovered by pioneers in the field.

Many of these finds were uncovered when dedicated collectors first began to look at their coins a little closer. Their work continues to serve as an anchor for most of the research that has followed.

In September 1973, legendary collector and author Bill Fivaz encountered an 1887 Morgan dollar with a strongly repunched date that was previously unknown.

The variety became VAM-5 when published in the subsequent edition of Comprehensive Catalog and Encyclopedia of Morgan & Peace Dollars by Leroy Van Allen and A. George Mallis.

Some interesting study on this variety can be found in Dollar Varieties and Errors Scrapbook compiled by Van Allen from the pre-merger Numismatic Error Collectors of America publication Errorscope. While the coin can be somewhat difficult to locate, the anthology is of greater rarity.

The VAM-5 1887 Morgan dollar is noteworthy for its strongly repunched date.

During this period of Morgan dollar production, the date was sunk into the individual working dies by several blows from a four-digit punch. Misalignment between blows caused localized doubling of the date. On this die, the shift was angular.

Close examination is required to see traces of this misalignment on the digits 18. However, the secondary impressions seen on the digits 87 are bold to a numismatist experienced in die varieties.

The marriage had a fairly long production run and late die stage examples are known, although they not as desirable as early die stage coins.

The unique characteristics of the date are far more difficult to see on worn coins or coins from worn dies, but secondary die markers may confirm attributions.

Several hundred examples are known and it is typically found in Mint State 62 or MS-63 condition.

Examples can be located with the exercise of a modest degree of patience.