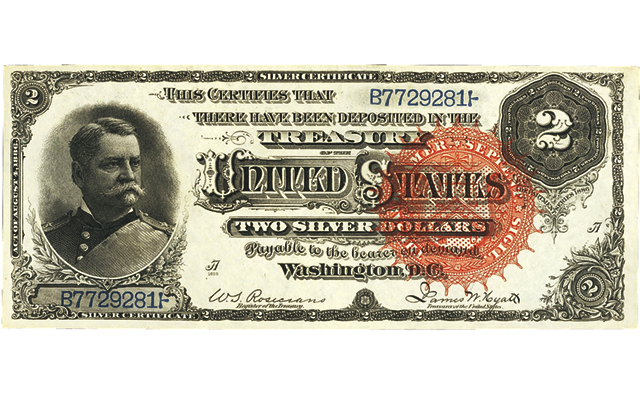 This 1886 $2 silver certificate, graded Gem Uncirculated 65 Exceptional Paper Quality by Paper Money Guaranty, will be among the notes offered by Heritage Auctions during its Sept. 3 to 8 Long Beach Expo Currency Signature Auction.

The designs on U.S. large-size notes in circulation in the late 1800s often are stunning examples of engravers’ art. Yet they were also used in everyday transactions.

The note will be offered in the Sept. 3 to 8 Long Beach Expo Currency Signature Auction to be conducted by Heritage Auctions.

A portrait of Gen. Winfield Scott Hancock appears at the left side of the face of the note facing the elaborate engraving of the denomination and U.S. Treasury seal.

Hancock, who held the rank of commanding general of the U.S. Army for 20 years, was a graduate of the United States Military Academy.

He served in the Mexican-American War and was a key figure in the Union victory at Gettysburg during the Civil War.

Though no estimate is yet given for the $2 silver certificate, another note of the same denomination and type, graded one point higher, at PMG Gem Uncirculated 66 EPQ, sold for $5,287.50 in an April 25, 2014, Heritage auction.