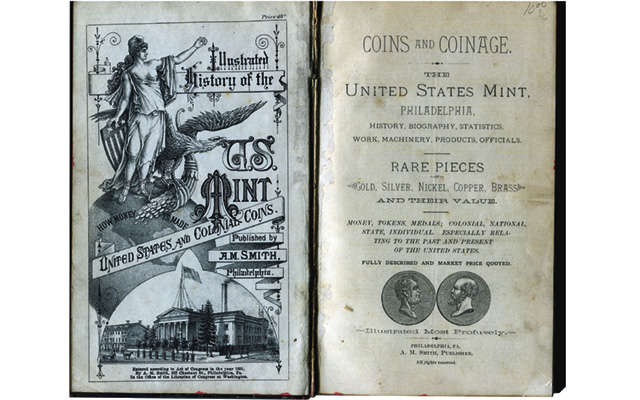 Examples of pages from The Illustrated History of the U.S. Mint, show the book was definitely "illustrated most profusely," as advertised.

Philadelphia publisher and collector Andrew Madsen Smith produced a 107-page pocketbook-size volume that covered the breadth of American coins in remarkable depth some 65 years before coin collecting got its bible, R.S. Yeoman’s A Guide Book of United States Coins (the Red Book) in 1946.

The Illustrated History of the U.S. Mint was produced for the better part of two decades, first by Smith and later by George Evans. As the years went by, the book grew to nearly 200 pages and included 24 pages of photographic plates.

Each edition is a treasure, but the first, printed in 1881, speaks especially to its day.

The title page contains a line drawing of William Barber’s wordlessly eloquent Lincoln and Garfield medal. The quarter-size medal has no legend but shows the busts of Abraham Lincoln, assassinated in 1865, on one side and James A. Garfield, assassinated in 1881, on the other.

The Mint, which rushed the medal into production just a few weeks after Garfield died on Sept. 19, 1881, charged $9 for gold medals and 60 cents for silver.

Smith charged 40 cents for his book, about twice the hourly pay for a coal miner at the time.

The current Red Book lists for $16.95, several dollars less than the average underground laborer’s pay of $23.51 an hour.

The earlier book functions as a guide to the Philadelphia Mint, showing how and where coins were made in the late 1800s. The text also includes a catalog of American coins, from the 1616 Sommer Islands pieces to the then-current Seated Liberty federal coinage.

The rarest coin, the book says, is the unique 1849 double eagle — a coin that was then sequestered in the U.S. Mint Cabinet and is now in the Smithsonian Institution.

“The next in rarity is the half eagle of 1815, for which, it is said, the King of Sweden, to complete his collection of U.S. coins had to purchase one at the enormous price of $2,000.”

Eighty years before Eric P Newman and Kenneth E. Bressett reported on the origin of the enigmatic coins in their 1962 book The Fantastic 1804 Dollar, Smith noted, “It is alleged the dies were not made in 1804, but many years later, to be used in presenting the pieces to a foreign representative.”

The 1881 book is available at used bookstores and online at eBay at prices anywhere from $10 to $100 depending on the whim of the seller.