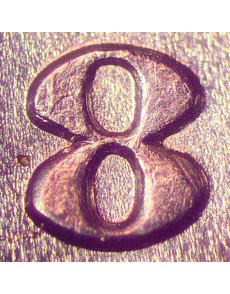 Faint remains of the flag of a 7 can be seen on surface of the upper left of the second 8. 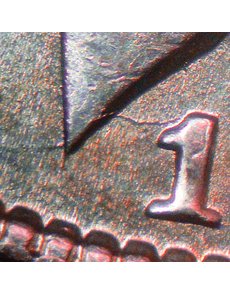 All examples of the VAM-55 1880-O Morgan dollar have this curved die crack between the point of the bust and the date. 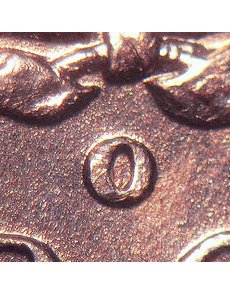 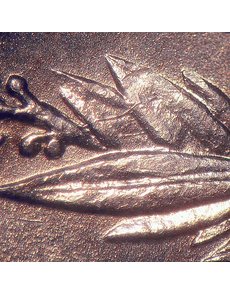 The specific die can be identified by a pair of scratches in the first group of leaves to the left of the wreath’s bow.

Overdates, even very subtle ones, are avidly collected in many series. Morgan dollars are no exception.

In 1880, antedated dies were modified and pressed into service at all four active Mints. On several of these dies, the traces of the underlying digits 7 and 9 are dramatic and obvious. Studying the stronger overdates helped unmask the weaker ones.

In February 2005, author Jeff Oxman found a previously unreported marriage of an 1880-O Morgan dollar with a weak overdate obverse he had featured in his work, SSDC Official Guide to the Hot 50 Morgan Dollar Varieties. It was described and plated in the annual update New VAM Varieties of Morgan & Peace Dollars by Leroy Van Allen as VAM-55. This specific marriage can be fairly difficult to accurately identify.

Both the obverse and reverse dies were used in three other marriages, so careful study of both sides takes on added importance.

The variety is rare in Mint State and uncommon in any grade. About Uncirculated 58 examples have an estimated retail value of $400, if available.

A “checkmark” — the lower left curve of the flag of a 7 — is found on the upper left surface of the second 8. At a glance, this may not be recognizable as an overdate, but the “checkmark” is also found on far stronger varieties.

This obverse die also clashed and cracked in an earlier use, so these stage markers are always present in this marriage.

The wavy die crack from the truncation of the bust to the top of the 1 is often the “pick up point” that makes a specialist take a much closer look.

Die scratches in protected areas can be used to confirm an attribution of this specific die even when the overdate has been obscured by wear from extensive circulation.

The reverse is defined by the small O Mint mark and a pair of die scratches in the wreath just to the left of the bow.

It is one of the earlier uses of this workhorse of a reverse die, so clash marks are not evident.