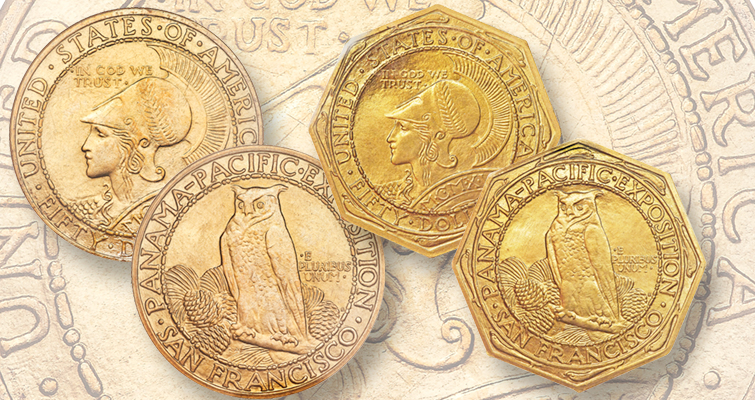 One of the finest-known octagonal 1915-S Panama Pacific International Exposition gold $50 commemorative pieces, graded MS-66+, sold for $288,000, and a round example graded MS-66 sold for $204,000 at Heritage’s Jan. 4 Platinum Night auction at the Florida United Numismatists convention auction in Tampa. 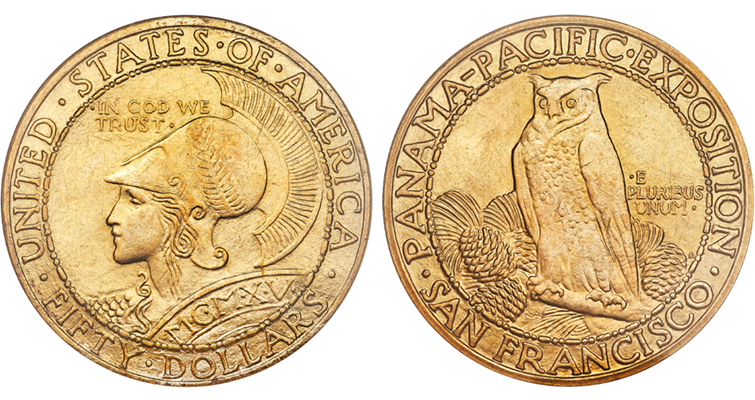 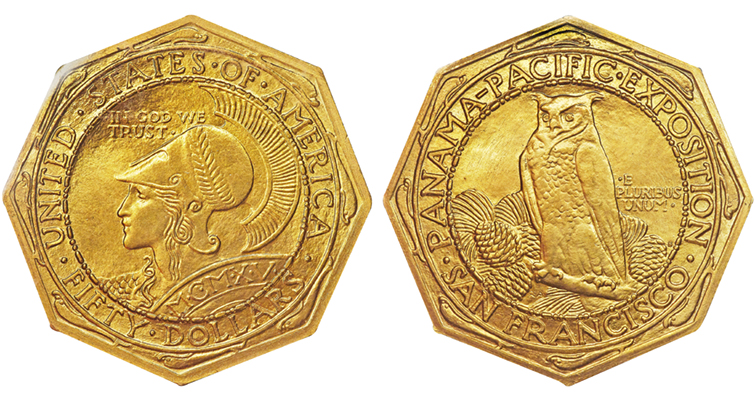 The collector wrote in the catalog introduction, “I decided to collect coins that were difficult to acquire, otherwise known as keys, condition rarities, and coins I regarded as beautiful sculptures,” adding, “I especially enjoyed the hunt for these special coins, as many were elusive and evaded detection, or they were held in very strong hands.”

The high denomination issue was also produced in a round format and both types had a maximum authorized mintage of 1,500 coins each. However, when originally offered at $100, these coins were extremely expensive, and the eventual total mintage was much less: 645 octagonal pieces and 483 in the round format. The remaining 1,017 examples were melted.

While the issue enjoys a high survival rate, many have been wiped, cleaned or otherwise damaged, so the typical $50 “Pan-Pac” is graded MS-62 or MS-63. Examples are rare in MS-65 and elusive any finer. PCGS has graded four in MS-66 with a single one in MS-66+ (though NGC has graded several in MS-67). The coins were struck on a 14-ton hydraulic press that was shipped to the San Francisco Mint specifically to strike these $50 coins.

The design, by sculptor Robert Aitkin, depicts Minerva on the obverse and an expressive owl on the reverse. Writing on this issue in his book Numismatic Art in America, Cornelius Vermeule observed, “These coins were a tour de force, dated to be sure, but unusual enough in all respects to be worthy of what American numismatic art could achieve when creativity and Mint technique worked in unison.”

A round example from the Berlin collection, graded MS-66 by NGC, sold for $204,000. Despite the lower mintage for round examples, collectors tend to gravitate toward the more exotic octagonal Pan-Pac $50 coins.

An instant collection could be found in a five-piece 1915-S Panama-Pacific International Exposition set, with its original case of issue, that brought $120,000. The coins were individually graded by NGC, with the octagonal and round $50 gold pieces each graded About Uncirculated 58. The gold $2.50 quarter eagle was graded MS-64 and both the 1915-S half dollar and gold dollar were graded Uncirculated Details, Cleaned.

The set’s original black leather case with a purple velvet interior and gilt lettering accompanied the five coins. The leather case was one of several different options available for collectors looking to buy these commemorative coins at the time of issue, joined by five-piece sets and 10-piece double sets in copper frames. Well-heeled collectors who purchased the two gold $50 pieces in the set for $100 each (making the five-coin set cost $200) would receive the smaller denominations and packaging at no additional cost. An original holder for the 10-piece Panama Pacific double set sold for $18,000 in the auction. 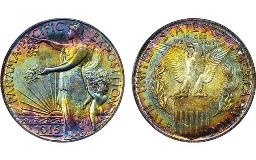 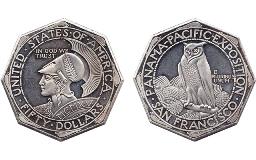 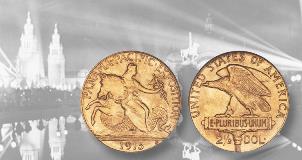