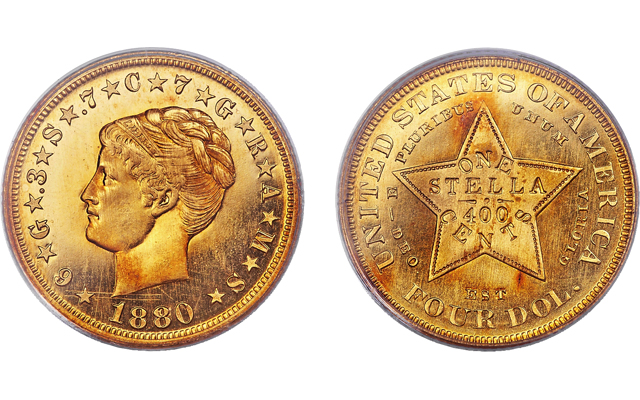 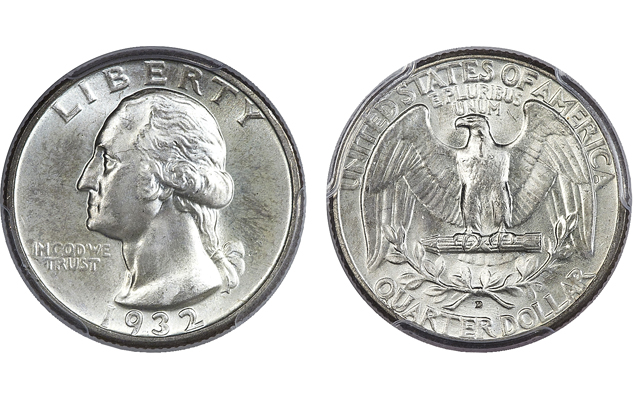 A 1932-D Washington quarter dollar in MS-66, tied with one or two others for the finest known, sold for $82,250 in what Heritage described as a landmark offering. 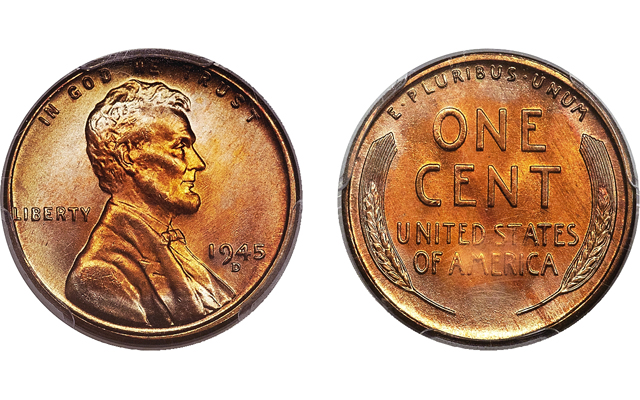 Leading bidding was the sale of an 1880 Coiled Hair Stella $4 pattern piece, listed as Judd 1660 and Pollock 1860 in the standard references to the pattern coin series, for $1,116,250. The piece was graded Proof 65 by Professional Coin Grading Service with a green Certified Acceptance Corp. sticker.

Of the four main types of the gold 1879 and 1880 Stella pattern coins — which get their nickname from the five-pointed star on the reverse — the 1880 Coiled Hair issue is the rarest.

Heritage’s roster of nine examples of the Judd 1660 pattern places the Long Beach example as the third finest known, bested by the top example, graded Proof 67 Cameo by Numismatic Guaranty Corp., that realized $2,574,000 as part of Bonhams’ 2013 offering of the Tacasyl Collection. The second finest known example was offered by Heritage earlier this year during the Central States Numismatic Society convention auction in April, where that NGC Proof 67 example sold for $1,821,250.

An 1880 Flowing Hair Stella pattern, Judd 1657 and Pollock 1857, graded Proof 65 by NGC, and with a CAC sticker, sold for $417,125 and was the third most expensive lot in the auction. It is one of 19 pieces traced of the issue and is the fourth finest known in Heritage’s list of examples.

Coming between the two Stellas in terms of price was a handsome 1933 Indian Head gold $10 eagle graded PCGS MS-65 that sold for $587,500. It is one of just 30 to 40 examples believed known from an original mintage of 312,500 and had last appeared at public auction nearly two decades ago.

The coin in the auction is among the finest certified by PCGS, who records eight submissions at the MS-65 level, two at MS-65+ and none finer. Its first recorded sale was as part of Kosoff and Kreisberg’s January 1946 auction of “The World’s Greatest Collection” (assembled by F.C.C. Boyd) where it realized $375. Heritage notes, “Is it fitting that one of the greatest 1933 Indian eagles known first appeared in what was heralded at the time as the ‘world’s greatest collection?’ If nothing else, it speaks to the outstanding quality of this piece.”

A 1932-D Washington quarter dollar graded PCGS MS-66 sold for $82,250. Heritage called the coin’s sale a landmark, writing, “The offering of this coin is far and away one of the most important events that Washington quarter collectors will experience.” Along with the 1932-S quarter dollar, it is a key to the series and represents the first year of the design.

The 1932-D rarity was described as follows: “This piece exhibits delicate, largely flawless satin surfaces with original luster residing beneath a thin veil of pale pastel toning. Only a microscopic tick hidden in Washington’s hair is at all worthy of mention, even if only for the sake of accuracy.”

While PCGS records an additional example in a PCGS MS-66 holder, Heritage notes that an NGC MS-66 example has not appeared at auction and explains, “Although it is possible the coin is in the current highest-ranking NGC Registry Set; confirmation is not currently possible, however, and it is equally possible that the coin has been crossed and is no longer in the NGC MS66 holder.”

The other PCGS MS-66 example, which features golden and orange obverse toning, sold for $143,750 at Bowers and Merena’s April 2008 Chicago Rarities Sale and established a record price for any Washington quarter dollar at auction. That example previously sold for $89,125 at a 2001 Heritage auction.

Heritage added that the example offered at the Long Beach Expo sale was making its debut appearance at auction and that the other PCGS MS-66 example went to a tightly held, private collection, implying that it is unlikely that it will appear on the market soon.