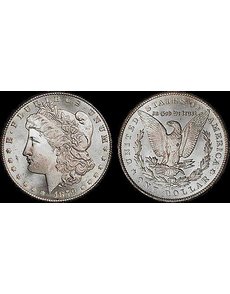 An 1879-CC Morgan dollar purchased for $90,000 in 2007 for inclusion in the Marshall CC Collection sold at public auction April 11 for nearly double that price.

The coin, certified Mint State 66 by Professional Coin Grading Service and once part of the Jack Lee Collection, was sold for $161,000 in Legend-Morphy’s Regency III auction at the Las Vegas PCGS Members Only Show.

The price realized includes the 15 percent buyer’s fee added to the final closing price of each lot.

The Morgan dollar was one of 315 lots in the sale that featured the Marshall CC Collection and the Forsythe Mercury Dime Duplicate Collection.

Of the lots offered, 281 were sold, bringing total prices realized to $1,984,842.50, according to Legend-Morphy. Firm partner Dan Morphy said more than 85 percent of the lots sold were purchased by collectors.

According to Morphy, in addition to those bidding from the auction floor, more than 100 collectors participated in the sale via LM Live, with 217 bidders overall.

All prices realized are posted on the firm website at www.legendmorphy.com.

Legend-Morphy’s Regency Auction IV will be held Thursday July 18, at the PCGS Members Only Show at the Bellagio in Las Vegas.

Consignments are now being accepted for the July auction.

For information about consigning to the auction, email Legend-Morphy President Julie Abrams at juliea@legendmorphy.com, call her at 717-335-3435 or visit the company’s website. ¦