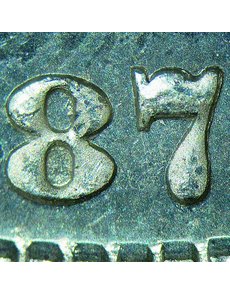 A pattern of die roughness is found inside the loops of the first 8. 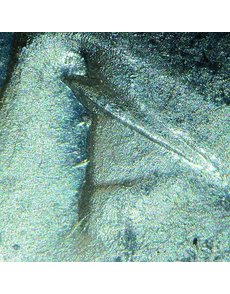 The “wild eye” spikes are the defining characteristic of the VAM-14.11 1878 Morgan dollar. 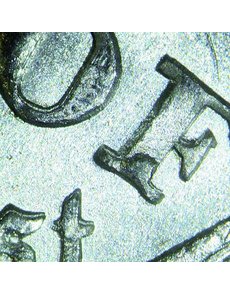 This reverse, instantly identified by a prominent lump on the f of of, was paired with 10 different obverse dies, each a different variety. 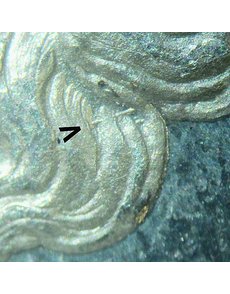 This short die gouge in the lower hair aids in the attribution of well-circulated examples.

This past January, I had the chance to study and photograph the VAM-14.11 1878 Morgan, 8 Tail Feathers dollar, one of the more elusive varieties in the series.

This variety is extremely rare with fewer than 20 pieces reported in the combined certified populations. The example illustrated had just been won at auction for a little more than $16,000.

The variety was discovered in August 1995 by Les Hartnett. It is described in the 1878 Morgan Dollar 8-TF Attribution Guide by Hartnett and co-author Jeff Oxman.

The VAM-14.11 coin is also highlighted in the most recent edition of The Top 100 Morgan Dollar Varieties: The VAM Keys by Michael Fey and Oxman. In 1999, the Top 100 co-authors selected this variety as a replacement for a piece of questionable existence, the VAM-11 1878 Morgan dollar, listed in earlier editions of their book. The VAM-14.11 coin is a key to completing a Top 100 set and one of several truly challenging components in a complete 8 Tail Feathers set.

The VAM-14.11 variety is identified by its obverse characteristics, most notably the spikes protruding from the front of Liberty’s eye, the result of die doubling. Die doubling appears on all the obverse lettering, but similar doubling is found on other varieties for this date. Die markers take on added importance when the “Wild Eye” spikes aren’t clearly visible as a result of wear or surface grime.

A distinctive pattern of rough lumps appears inside the first digit 8. Long die scratches are located along Liberty’s chin and the back edge of the Phrygian cap.

The strongest secondary diagnostic is a short diagonal die gouge in the lower hair directly above the first right star. This is a protected location that can withstand fairly heavy circulation.

The reverse die used for the VAM-14.11 variety is also paired with no less than 10 distinct obverse dies. Eight of these marriages are also considered rare.

It is likely simply a coincidence, but the question is worth asking: Was there something about this particular reverse die that was destructive to its mates?